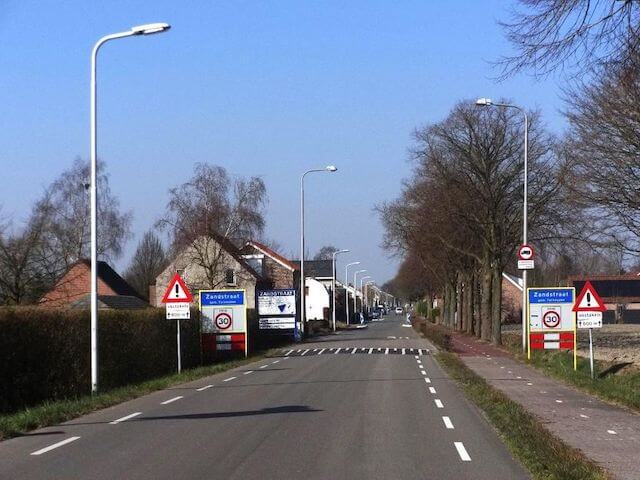 The detour around Zandstraat is a succession of dykes with poplars, grass paths, gravel roads and fields. Yet the walking route around the village between Sas van Gent and Philippine is far from boring.

Zandstraat, living and working in the countryside.

For many motorists, Zandstraat is an inconspicuous village through which you pass, from or to Philippine. Few people know that the water from the Braakman and Sassche Gat lapped against the current Zandstraat until the nineteenth century. You can still see that just after the start of the walk. The lands on the right of the road to Philippine are higher than those on the left. The street originated at the separation of the higher and lower grounds, where the Sassche Gat started to silt up. The oldest farm from 1852, at house number 70, is still there.

Zandstraat was an agricultural community, including a blacksmith shop from 1910, a wagon construction company and a harness maker / leather worker. The craftsmen have disappeared; farming is still going on. Immediately outside Zandstraat you see (flowering) potatoes on the right. Beyond the orchard, turn left into Trappistenstraat, it is still all about living and working in the countryside.

The grain drops its cups, then you know it's almost harvest time. You may see the imposing combines driving in the field to thresh grain. These can be recognized from afar by the dust cloud behind them. After the harvest, green manure is often sown to keep the soil fertile.

Now no longer visible in the landscape, but nice to know: on the corner with the Kapellestraat, at junction 62, there were field kilns where bricks were baked in the 1930s. In Zandstraat itself, various houses can be designated that were built with the slightly darker stones from this brickyard.

The Korteweg turns into an unpaved path. If you don't want to go through the tall grass, you can also walk on the Driekwartweg to the left of the dike towards junction 61. You can also take a break. On top of the dike is a bench with a view of the farmland, the canal and the railway.

Zandstraat had a station on the Ghent-Terneuzen railway line until 1939 and freight trains still pass by daily. After the railway there is a lovely gravel path along the Sint Albertdijk. Note the stairs halfway up. Be sure to climb this, because you will end up in bunkers with gun holes, made by the German troops in World War II.

At the end of Eugeniaweg, at Driekwartweg, is the old nicotine factory, founded in 1912 by the Frenchman Gaston Decoop. When mobilization is announced in 1914, Decoop must also report. The nicotine factory is no longer operational, but a flax factory was established.

The last part of the route goes under the electricity wires, back over the railway along the hamlet of Vaatje and, via junctions 64 and 63, over the flowery Van Remoortereweg. Just back to the De Straete community center and you're around.

The Van Remoorterepolder is a polder between Sas van Gent and Philippine, belonging to the Polders in the waterways to Axel and Ghent. The polder was created by embanking mudflats in the Sassche Gat. This polder was completed in 1852. It covers 203 ha and is named after the Belgian family Van Remoortere.
No extra information.

The Eugeniapolder is a polder north of Sas van Gent, belonging to the Polders in the waterways to Axel and Ghent. The polder was created after the Sassche Gat, due to its closure in 1826, quickly began to silt up. In 1845, license was granted to F.W. Van Zuylen van Nievelt and Albert Gheldolf, to contain 80 ha of marsh. The polder was completed in 1846 by damming. She was named after Albert Gheldolfs' wife's first name.
No extra information.

Philippine station is the former railway station on the Ghent-Terneuzen railway line near Philippine in Zeeuws-Vlaanderen. The station opened on April 1, 1869 and closed on April 15, 1939.
No extra information.

The Kleine or Nieuwe Sint-Albertpolder is a polder north of Sas van Gent in the Dutch province of Zeeland. The polder belongs to the Polders of Albert and Isabella. The polder was created by embankment of the salt marshes north of the Groote or Oude Sint-Albertpolder. This was done in 1805 by the Compagnie Blémont. These salt marshes lay in a bend of the Sassche Gat, which ran from Sas from Gent to Philippine. The polder is 72 ha.
No extra information.
Bereikbaarheid & Horeca