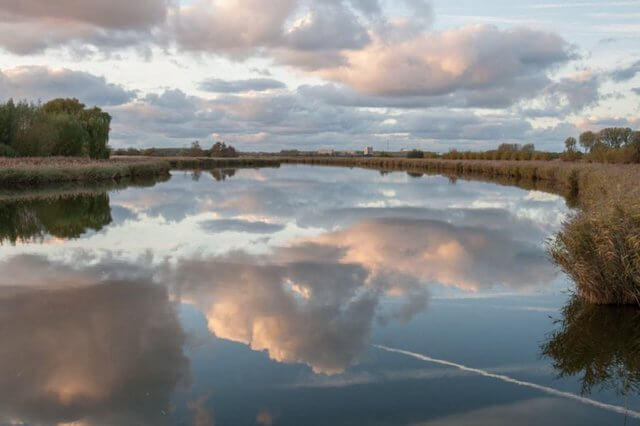 Hoek was in a different place in the twelfth century than it is now. The village has even moved twice. Vremdijcke, as Hoek was still called at the time, was rebuilt after the breakthrough of the Braakman in 1488. That village also drowned. The inhabitants built a church and a mill on the corner of two dikes. And the current Hoek was born.

Hoek and the fight against the water.

During the walk in Hoek, this eventful history is far away. Only the name of the Vremdieke nursing home still reminds of the Vremdijcke drowned in 1600. Hoek has more often been "drowned and resurrected" in recent centuries. The resilience and drive of the inhabitants can be seen in various locations.

The start and end point of the Ommetje are at the Dutch Reformed Church. The previous church largely burned down in New Year's Eve 2015 and was rebuilt after a large crowdfunding campaign.

The route goes over the Noordstraat, along the dyke with ash, towards junction 50. Leave the route for a while to visit the cemetery on the Begoniastraat. The cemetery has recently become - also with the help of residents - a leafy walking park. Recommended!

Continuing the route you will arrive in the Rozenstraat, which runs parallel to the Voorste Kreek. This creek was a tributary of the Braakman estuary until 1542, until the northern Lovenploder was embanked. You would almost be jealous of the residents for their beautiful view of the water. Where you now see Dow's factory pipes, were probably the two Vremdijckes.

The 65-meter-long wooden bridge over the creek has only been there for about eight years. That also got there thanks to the efforts of villagers. On the other side, turn left to the entrance of the Toorenbos. This young forest has grown in 30 years into a varied, dense forest with paved paths, glades and picnic benches.

Via the football fields of Hoek you go back into the village at junction 51 over the Molendijk. The height difference between the dike houses and the gardens below is considerable. When Vremdijcke completely disappeared under water for the second time in a storm surge in 1601, the inhabitants fled south to the Mauritsfort. They built a new village at the intersection of three polders - at "Den Hoek van twee dikes".

The bell, or "bell" on the corner of Molendijk and Rozenstraat, has a nice story. The original bell was housed in the drowned Vremdijcke and then hung in the church in the Koudeploder for 200 years, until the French took it to Axel. The clock fell off the cart during that transport. Hence the expression: "Den Hoek has fallen off the cart".

Almost back at the starting point, there is another round trip via junction 80. Make sure to do that, otherwise you will miss the allotments, the cemetery on the Molendreef and the beautiful view at sunset on the back of the Windlust flour mill and the church.

Dutch Reformed Church is a church at 6 Langstraat in the corner of the municipality of Terneuzen. The church and tower are a replacement of an earlier church that was located in the same place. The design of the brick church with front tower in a style referring to the water management style was provided by architect L. de Bruijne. The tower was replaced in 1900 and the church followed in 1905. The different construction phases can be distinguished because the brick used differs slightly. The church has had national monument status since 1997. In the church is an oak pulpit from 1760 that comes from the old church. The stained glass windows behind the pulpit date from 1959 and have no monumental status. The Protestant church of Hoek was completely destroyed by a major fire on New Year's Day. Only the walls of the church are still standing. The roof of the church went up in flames and the church tower collapsed. The rebuilt church reopened on December 9, 2016.
No extra information.

The creek was dike in when the Lovenpolder was created around 1542. It was a side arm of the Braakman. It almost reaches the core of Hoek. Today the banks of the creek form a nature reserve, where four species of orchids are found and where, due to the slightly brackish water, the rare wild celery is also found.
No extra information.

The 7 ha deciduous forest was planted in 1989 and is located in the Lovenpolder near the Voorste Kreek. The parabolic forest path is striking. Although it is still a young forest, forest birds such as the long-eared owl and the green woodpecker are already breeding there. The butterflies include the orange tip and the variegated sand eye. An amphibian pool was constructed in the forest.
No extra information.

Windlust is a flour mill in Hoek in the Dutch province of Zeeland. It is a round, brick-built scaffolding mill from 1857. It was built to replace a post mill, of which useful parts were incorporated in the new mill. The mill remained in operation until 1958 and then fell into disrepair. It was restored in 1979/1980, but then it fell into disrepair and after 2004 the mill was hardly operated. A new miller came in 2008 and Windlust has been grinding regularly ever since.
No extra information.
Bereikbaarheid & Horeca