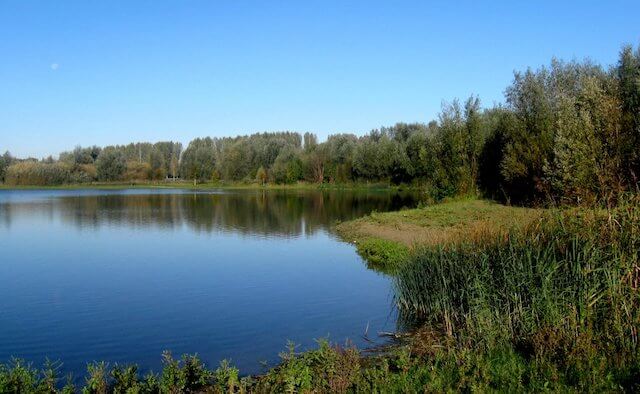 Zeeland Flanders may have few forests, but there is a lot of forest around Axel. The forest path already starts in the residential area. The detour goes straight through forest, past well-filled fields and along water. In fact, a lot of water.

Potatoes and draft horses, that's what the Axelaars were known for. The inhabitants are also called "erpelkappers" because they scoured the fields for remaining potatoes. In many Axel's households there is still a painting of a draft horse or medals in drawers remind us of champion horses. The detour starts at node 44 on the Kanaalkade. On the central reservation is a statue of the Zeeland draft horse, as a tribute to the loyal labor force. Horse lovers were disappointed when the statue was unveiled; due to lack of money it was smaller than expected. Axel lived on agriculture. The fortified town had a hard time in the Eighty Years' War, but Prince Maurice's decision to flood Axel's land also brought prosperity for Axel. The floods covered the land with silt. The fertile clay soil brought prosperity to farmers, as witnessed by the monumental farms and barns in the area. Most horses were claimed by the Germans in World War II or hit in bombing raids. You now mainly see horses at the riding school. The market is still on Saturdays. Although praising and bidding on the best buttocks is a thing of the past. The draft horse on the Kanaalkade overlooks the Kleine Kreek, where the swimming pool was located until the 1970s, and even earlier, the side canal ran to Hulst. You soon turn right into the forest, over an idyllic bridge to node 45. The route through the residential area of Zonnemare to node 46 ends at the Eerste Verkorting. It is so called because it was a shorter route for the farmers. In popular parlance the circle via the Langeweg and Kinderdijk was also called “Ward Velent”, after his living room cafe at the end of the Verkorting. Along this road now stands, in addition to potatoes and wheat, giant miscanthus, a crop sometimes called elephant grass. A little further on, a field with brown beans. Drying used to be done on riders on land. At a driveway of a farm you go straight through the forest towards node 49. Along the path to node 47 there are many orchids and the Put van Emmery, where family Egyptian goose swims slowly through the water. Nowadays, fishing is more common than skating on the ice rink near node 69. At the water tower, which is more than 60 meters high, you climb the stairs to node 77 and go a bit towards 66 into the nature and recreation area Smitschorre. Just before the Justaasweg you choose the short route down the slope or take the longer route to the right for a look at the artificial forest and the nature play forest. And back to the start via the Kinderdijk. We are forced to save the water tower, Het Warenhuis museum and the city mill for the next time.

Put van Emmery is a true paradise for waterfowl and a watering hole for other wildlife, including the deer.
No extra information.

The water tower in Axel in the municipality of Terneuzen in the Dutch province of Zeeland, was built in 1936. The water tower was designed by architect C. van Eck and has a height of 60.60 meters, making it one of the higher water towers in the Netherlands. The tower has three flat-bottomed water reservoirs with a storage capacity of 500, 500 and 300 m³.
No extra information.

Stature R. Ivens. In the "Kunstbos Smitschorre" in Axel are enlarged Horsetail plants, statues of five and three meters high made of bronze and brass.
No extra information.
Bereikbaarheid & Horeca