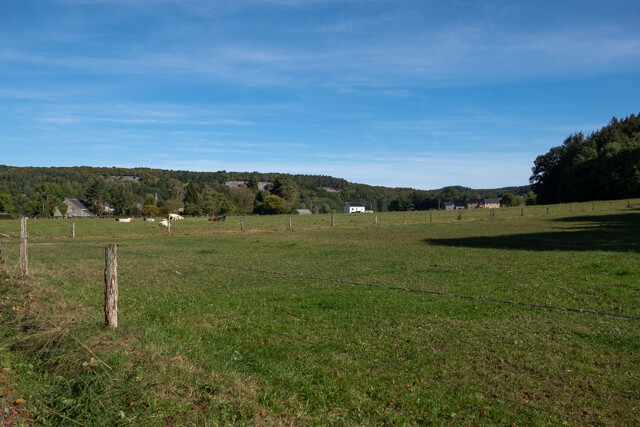 This beautiful walk starts at Resteigne castle and goes along the banks of the Lesse to the picturesque village of Belvaux. From the village it continues in the direction of the Les Pairées nature reserve, a typical Calestienne landscape with calcareous grasslands and numerous juniper bushes.

From the parking lot you walk over the beautiful arched bridge of the Lesse and you immediately see the castle of Resteigne, which is not open to the public. From the castle you walk further along the banks of the Lesse and almost immediately pass an old quarry. As soon as you leave the forest, the beautiful village of Belvaux comes into view with the typical limestone rocks as background. You pass an old lime kiln, you cross the Lesse again to walk past beautiful stone houses in the direction of the Les Pairées nature reserve. In Les Pairées, rich limestone grasslands are interspersed with some forest. Via the nature reserve you descend back to the starting point.

Relaxed walk for all seasons.

Resteigne Castle is not open to the public.

Near the picturesque bridge over the Lesse, you will see the Castle of Resteigne, a robust square building from the 18th century, supplemented by a farmhouse. The main building and the tower with entry gate in the classified façade date from the end of the 11th century. The story goes that Edmond d’Hoffschmidt, son of the castle lord of Resteigne, served as an officer in Napoleon's army. Discouraged by social injustice and out of grief for an impossible love, he then retired to a secluded cottage, built from unhewn stone and covered with straw. There was a central chimney and there were windows in the side walls. After his father died, and from the realization that he had separated himself from wealth without coming closer to the poor, he returned to the castle and finally fulfilled his role as lord of the castle. He was deeply concerned with the people, provided agricultural advice to the people, and had a doctor and a teacher come to Resteigne. He also had a school built and restored dilapidated homes with personal gifts. All of these generous initiatives earned him the nickname "Friend of the Poor" among the villagers. A second nickname, "Le vî Monseu", has been his epitaph since 12 March 1861.
Geopark Famenne-Ardenne
5580 Han-sur-Lesse
Place Théo Lannoy 2.
Website: www.geoparcfamenneardenne.be
Accessibility & HRC

Starting point:
6927 Tellin Chemin de Chéfiris 155.
Parking:
Parking just over the bridge of the Lesse behind the restaurant Lesse Capade coming from Resteigne towards Belvaux.
Public transport:
For more information look on www.infotec.be