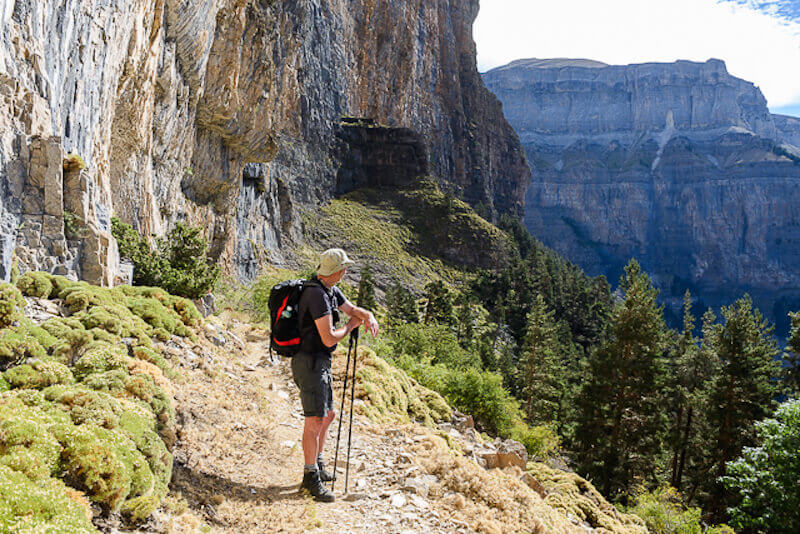 Most people take the popular hike to the Faja de Pelay and Goriz refugio in the Ordesa valley. This walk is less well known but also highly recommended. During this walk you will cross the 'terrace' of Racón, which lies on the north side of the Valle de Ordesa. The views of the Cotatuero and Carriato valleys are really breathtaking.

Most people do the walk in the other direction but it is advisable to follow it in the direction as described in our route description. The reason is that the climb on the other side is quite steep and the path has been eroded by the many hikers. The climb on the other side is more gradual and goes through a large beech forest where you have plenty of shade. The direction in no way influences the beautiful views. You leave at the end of the parking at the information house and go to the Virgen de Pilar. Here you go left and walk through a beech forest in the direction of the waterfall of Cotatuero. From here the 'terrace' of Racón starts and the valley reveals its secrets. Sometimes some tread certainty is needed on the path, but it never is dangerous. Therefore our advice: Look = stop. At the end of the panorama path, when the Tozal de Mallo comes into view, you start the steep descent. The last part goes over asphalt back to the parking where you can enjoy a drink and a snack on the terrace.

Sturdy hiking shoes are a must.

Not recommended for people with fear of heights.

Some step security is required without it's becoming dangerous somewhere.

If there are still snowfields, this walk is very dangerous!

The Ordesa y Monte Perdido National Park is the oldest national park in Spain. In 1918 the Ordesa valley was designated as a national park. In 1982, the area expanded from 2,100 hectares to 15,608 hectares and was renamed "Parque Nacional de Ordesa y Monte Perdido. The park contains some huge canyons: Ordesa, Añisclo, Escuain and Pineta. Of a size that is not found anywhere else in Europe. The park has a height difference of 2,600 meters, from 750 meters in Añisclo to the 3,355 meters on Monte Perdido. This is the 3rd highest peak of the Spanish Pyrenees of which Ordesa is part. Since 1997 the park also falls under the UNESCO World Heritage.
Ordesa y Monte Perdido
Website: www.masspanje.nl

Torla is the most important place and the gateway to the Valle de Ordesa. The village is situated at an altitude of 1032 m, on the left bank of the Ara river. It is surrounded by five peaks ranging from 2000 to 2848 m, covered with dense and green pine forests. The picturesque village has a small medieval center, cobbled streets and stone houses with slate roofs. The village owes its name to the tower (Torre) that had to defend the village against French invasions. This fort stood on the site of the current Romanesque church, upon entering the village on the large rock overlooking the valley and the road. It can be very busy here in July and August. There are a few restaurants, bars and a 16th century church with a beautiful Romanesque porch. Torla is also home to the Parque Nacional de Ordesa y Monte Perdido visitor center. There is a 20-minute film about the park. This is started in English on request. Furthermore, everything is in Spanish. There are also exhibitions about, among other things, the ibex. Open from 10 am - 2 pm and from 4 pm - 8 pm.
Torla
22376 Torla Plaza de la Constitución 1.
Website: www.torla-ordesa.es
Accessibility & HRC