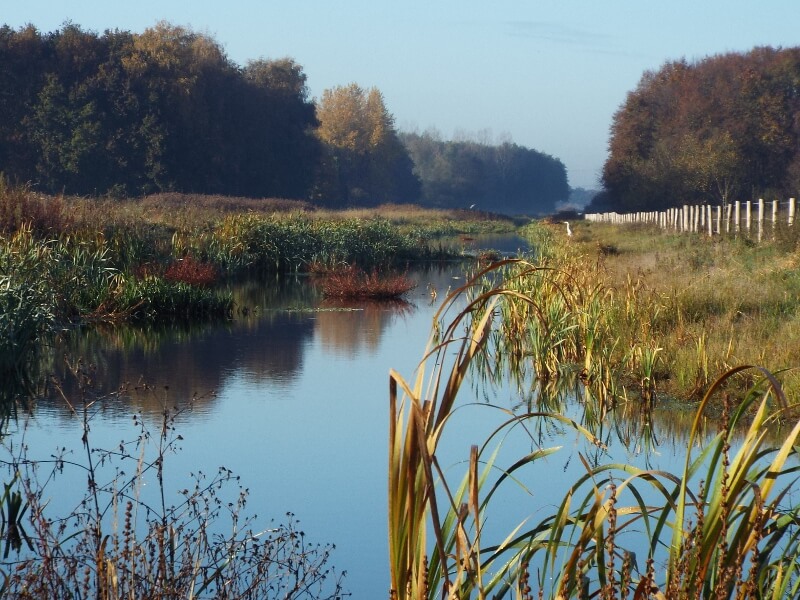 The walking tour goes through the Overloon Dunens forest area and along the Loobeek stream. Overloon is best known for its National War and Resistance Museum.

At the end of World War II (1944), Overloon was almost completely destroyed in the Battle of Overloon, a ten-day tank battle between an American tank division and the German army. The museum, a military cemetery and street names are reminiscent of this time, 14 Oktoberplein was named after the liberation of Overloon on October 14, 1944, after which the fighting lasted for a few days. The small cemetery with 280 graves contains the remains of one Dutch soldier, and 265 British Army and 14 Air Force soldiers who fell during the Battle of Overloon. The name of the walking tour is derived from the former elongated drifting sand ridge that was south of Overloon. This shifting sand ridge is indicated by the Kokkenberg to the east of Overloon and Het Helder to the west. The drifting sand ridge was part of the wasteland until the beginning of the 20th century around Overloon. Parts of this land are planted with trees mainly coniferous for production. Due to the current management measures, the production forest is transformed into a more natural forest with open areas interspersed with more varied forest. In the Overloonsche Duinen, the walking tour winds through forest, heathland and in various places passes over dunes covered with juniper bushes. The Loobeek flows south of Overloonsche Duinen and runs along the Smakterveld into a swamp zone consisting of wet grasslands. The Loobeek is also called the blood stream, on October 16, 1944 fierce fighting took place here between the Germans and the English who were on their way to Venray.

The paths along the Loobeek are mainly grass paths, sturdy walking shoes, preferably waterproof, are recommended.

Starting point:
5825 AM Overloon Museum Park 1 Entrance War Museum.
Parking:
You can park in the large car park at the War Museum.
Public transport:
Bus stop Museumlaan on Venraijseweg at the location of a catering facility.
OV9292 | Internet: www.9292ov.nl

HRC Starting point.
Around the 14 Oktoberplein.