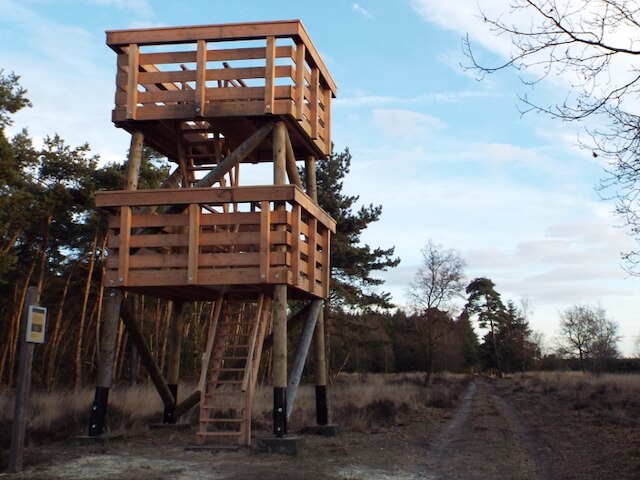 Those countless dots are drifting dunes that were created by sand drifts that became overgrown with pine forest in the course of the 20th century. The dots remained well recognizable in the western part. The Stippelberg owes its name to these hills. In the eastern part of the Stippelberg the walk goes over a part of an old path the Oude Bakelsedijk that is now only visible as a worn out unpaved path. Peat was transported along this path for centuries by the residents of the Peel. This peat was put into the marshy peat area in the neighborhood and was removed as fuel, stable bedding, fertilizer and for sale (the latter often illegal). In 1810, the Oude Bakelsedijk was one of only two of the then-large roads that ran through Gemert-Bakel. The road ran from Eindhoven via Bakel and Milheeze to Nijmegen. Important archaeological finds from the Stone Age have also been made near this road. The amount and nature of the finds indicates that people lived there thousands of years before this road existed. Furthermore, one passes along the path the foundation remains of the Freya search radar that stood there during the Second World War. This radar was part of the German radar station that was called Bazi. The camp consisted of a collection of barracks. a few transformer houses, a garage, a dining room with kitchen, workshops and three radars.

The Freya is a radar system used by the Germans in World War II to defend against the Allied bombers. The radar was an important part of the German radar station that was called Bazi. It was located on the edge of the Stippelberg estate near the Rips. The station was manned by 60 people and worked with 3 radars: a Freya search radar and two Würzburg Riesen to measure the position of an aircraft.
Erfgoedwiki.
www.erfgoedgeowiki.nl
Accessibility & HRC

Starting point:
5763 PK Milheeze Kaak 11 Parking space Natuurpoort Nederheide.
Parking:
The nature gate is located on the Stippelberg between De Rips and Milheeze. You can park in the paved parking area of the nature gate or in the larger unpaved parking area to the left of the road just in front of the nature gate.
Public transport:
Boswachterij bus stop, De Rips. Enter the parking lot opposite the forester's home. Start the route description at point 5 last line.
OV9292 | Internet: www.9292ov.nl