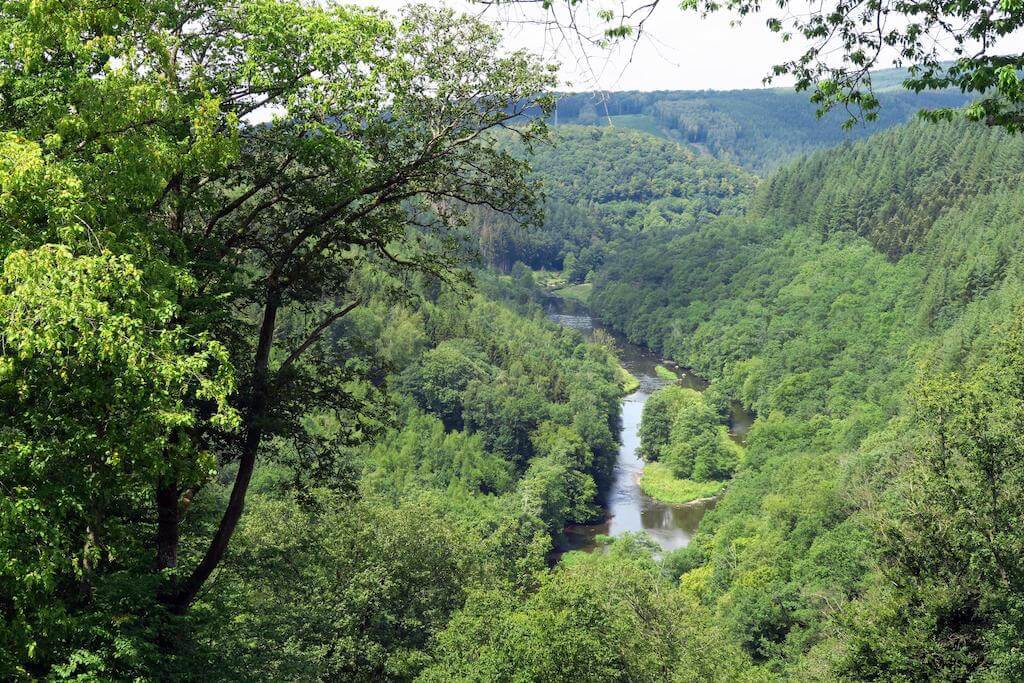 On the Hérou rocks where you get a beautiful view of the river, the trail follows the course of the Ourthe. The route runs largely along a small stone path that takes you along beaver dams and the Celtic fortification 'Le Cheslé'. From the high wall you have a beautiful view of the landscape of the Ourthe. From there various steep roads and paths depart that take you back to the starting point 'Belvédère'. There you can one last time admire the unspoilt charm of the six meanders of the Ourthe and have a bite to eat.

The walk goes from Les Ondes on the Eisleck Trail to the peninsula of Le Cheslé and on to the Celtic fortress of Cheslé. Then it goes via Laide Covée and Au Vevi back to the starting point.

Bring your camera and binoculars.

Sturdy footwear is a must. Rain gear, picnic and water are necessary.

The walk can be done all year round, except when the river water rises and with black ice.

Be careful when you climb to the viewpoint of the Hérou rock.

This Celtic fortress served as a shelter for local tribes in the 7th, 6th and 5th century BC. The site is included in the list of the "Patrimoine Majeur de Wallonie" (cultural heritage) under the name "site archéologique du Cheslé" between Maboge and Nisramont. According to popular legend, this remarkable and hard-to-reach place would be the hiding place of all the elves. There are in any case obvious traces of habitation by a group of which little is known. Since 1960, deep archaeological excavations have been under way. Le Cheslé is a Celtic fortress (probably the largest in Belgium - 13 hectares) that was inhabited between the 8th and the 6th century BC. In the course of occupation by the Celts remarkable improvements were made to the double bailey, which is more than 1750 m long. A reconstruction of this building was realized in 1980 by the National Association for Excavations and gives a picture of the ingenuity of this people. It also shows the deterrent effect of the fortress for a possible enemy. Excavations, undertaken by the Free University of Brussels, have studied the structure of the barrier wall. It is erected on the narrowing of the loop, the most vulnerable part of the reinforcement. It is a wall of about 6 meters high and raised against every attack by the enemy from the high plateau. The historic and picturesque visit to this place deserves a half-day walk. The Legend of the Golden "Gatte" tells that in a well, located in the center of Cheslé, there is a fabulous treasure that comes to the surface every year on Christmas Day when the bells have struck the twelve strokes of the midnight mass. Whoever wants to take possession of it must throw a black chicken into the abyss and take the suitcase without speaking the slightest word. Three farmers, who have tried this treasure hunt, but have announced their success too loudly, have disappeared forever. The site is registered in the Main Heritage of Wallonia under the name of archaeological site of Cheslé and Val de l'Ourthe between Maboge and Nisramont. Source: Maison du tourisme of Houffalize - La Roche.
Syndicat d’Initiative de Nadrin.
6660 Nadrin
Place du Centre 4.
Website: www.nadrin-le-herou.be
Accessibility & HRC

HRC starting point.
In Nadrin you can go for a meal in one of the many restaurants or drink a Chouffe from the nearby Achouffe brewery.