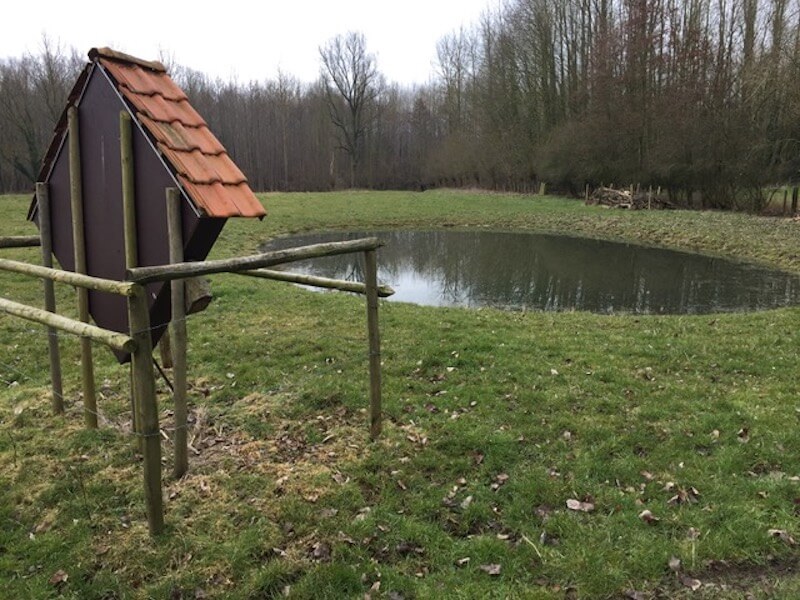 This nature walk in the Brabantse Kouters takes you to meadows, brook valleys and forest edges. In prominent spots are information panels about cultural-historical facts or about nature. D'Helle or dells are small brook valleys or creeks. These dells are situated in the continuation of the Wedbeek. Wed or wad are fordable places.

The walk goes via the Puttenbeek, where the only reed collar of the region is located and then goes towards the De Paddebroeken nature reserve. Afterwards you walk along the edge of the Paardenbos with beautiful views of the Kartelo and Heibos. Then it goes towards Mollem and the Beek valley where pollard willows and water mills adorn the landscape.

This area is the only place where a large natural reed collar occurs in Opwijk. D'Helle runs into the Puttengracht, named after the wells that have arisen as a result of excavations. D'Helle is a place where in ancient times the fertile black-gray marl soils from the old riverbed have been dug to make the agricultural land more fertile. Around the turn of the century, people discovered piles in a ground pattern near D'Helle. It would be clues to the first settlements in this region.
Natuurpunt Merchtem
1785 Merchtem
Wolvertemsesteenweg 157
Website: www.natuurpuntmerchtem.be.

Brook forest is characterized by a permanently wet soil which results in peat formation. That is why it is so important that timber management is done so that the fauna and flora can thrive there. Willow species and the black alder feel at home in this biotope.
Natuurpunt Merchtem
1785 Merchtem
Wolvertemsesteenweg 157
Website: www.natuurpuntmerchtem.be.

This nature reserve consists mainly of wet meadows and forest. The name Paddebroeken already occurs in the 15th century and means a broad piece of land between two furrows, located in a meadow or wet forest. This area is a sloping pasture ranging from reasonable wet to very wet, located on the Wedbeek. In the six pools, the brown frog and the alpine triton thrive well.
Natuurpunt Merchtem
1785 Merchtem
Wolvertemsesteenweg 157
Website: www.natuurpuntmerchtem.be.

In Flemish Brabant, the forest area is highly fragmented. The Heibos and the Kartelobos are mixed deciduous forests that include beech, pedunculate oak, alder and willow. In the spring, the bluegrass, wild garlic and bird's milk color this forest. The Kartelobos is located on a hill so you have beautiful views to sometimes the atomium in Brussels. Here you will find the kestrel, buzzard, tawny owl, little owl, nuthatch and roe deer. The Paardenbos, also called Paddenbroekenbos, is originally a mixed area of stream-accompanying forest and swampy meadows. Today it is mainly a poplar plantation, management is working on this so that this poor area can be enriched. The plot situated along the brook is a cutting area that evolves into an alluvial alder forest. An inland hedge of hawthorn and blackthorn was planted on the upper edge, on the drier part a plot with old apples, pears, cherry, walnut and one medlar is planted.
Natuurpunt Merchtem
1785 Merchtem
Wolvertemsesteenweg 157
Website: www.natuurpuntmerchtem.be.

Brooks play an important role in nature management. They form a connection between the different nature reserves that often lie in valleys. In the shores the kingfisher digs corridors for his nest. The Grote Molenbeek and several of its side streams, such as the Kloosterbeek, are unfortunately heavily polluted. The stream rises in Kobbegem and together with the Molenbeek forms the Vliet that flows into the Rupel.
Natuurpunt Merchtem
1785 Merchtem
Wolvertemsesteenweg 157
Website: www.natuurpuntmerchtem.be.
Accessibility & HRC

Starting point:
1785 Merchtem Peperstraat 43.
Car Park:
Car Park Railway Station Merchtem. On the parking drive as far as possible away from the station.
Public transport:
Very easy to reach by public transport.
Look on www.delijn.be or on www.belgianrail.be for more information.