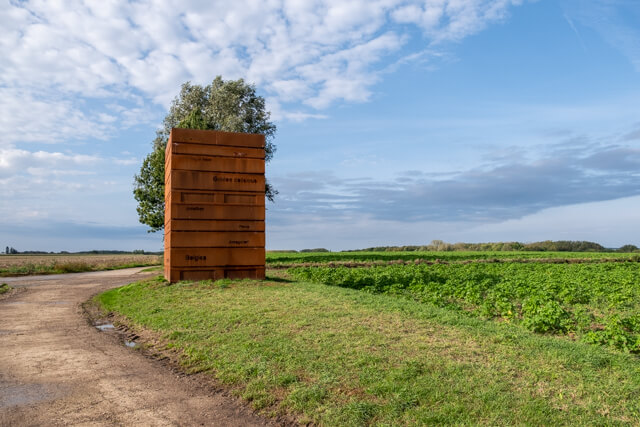 This walk goes through the exceptionally beautiful landscape of the Mene and Jordan Valley with golden grain fields and rolling hills as a backdrop. In addition to the wet soils along these two side streams of the Gete, you will also find slopes with dry fields and grasslands, some side valleys and the Willebringen forest in the area. The panorama from the Pallox observation tower is a feast for the eyes.

From the village you walk along the edges of the Mene and Jordan Valley to the Pallox observation tower. From the tower you have a beautiful panorama. Then you walk in the direction of the hamlet of Hoksem. In Hoksem there are still some old farmhouses that are typical of the region as well as a fully restored water mill. When you leave the hamlet you walk along slopes with dry fields, grasslands and the Willebringen forest to the Carolus farm with gatehouse and dovecote from 1760. In Meldert you still walk along the donjon of Meldert that is built with the white Gobertan stone from the region.

The paths can be quite soggy

The Fruit-like artwork by artists Hans Tuerlinckx and Sven Vangodtsenhoven is a lookout tower of stacked corten steel apple crates and cites a unique piece of fruit-growing history. Workers used to stand on a similar tower to look out for undeclared work. On the sides are the names of fruits from the region. Through the peepholes you have a panoramic view of the blossoms.
No extra information.

Babelom is a small hamlet in Meldert Hoegaarden that comprises only a few houses, but has one of the most beautiful farms in the region. The Carolushoeve is a square farmhouse, whose gatehouse with pigeon house dates from 1760.
No extra information.

The donjon of the lords of Meldert largely dates from the 14th century and was built on a swampy piece of land between two arms of the Molenbeek, along the current Sint-Ermelindisstraat. It is now hidden behind the Prins Kardinaal farm. It is a site with ramparts, which had no military function since the 15th century. Restoration work was carried out on this donjon in 1984 on the initiative of the Hoegaardse Heemkundige Kring. The tower has been protected since 1981.
No extra information.

Place names such as China, Egypt and Babelom bring you into other atmospheres here. Because of the exceptionally beautiful landscape, the Mene-Jordan Valley is one of the most interesting walking areas in Flanders. Golden grain fields and rolling hills delight the Mene-Jordan Valley. The brook valley itself is completely hidden in the field landscape. Not one, but two streams make their way: the Jordaan and the Menebeek. The streams merge into one another and thus form a green V when viewed from the air. In addition to the wet soils along the streams, you will also find slopes with dry fields and grasslands, some side valleys and the Willebringenbos in the area. The church of Meldert was built with the local Gobertan stone. Millions of years ago, the region was repeatedly flooded by a sea that kept withdrawing. That sea left behind a package of deposits that surfaced in various places in Hoegaarden. The limestone sandstone benches are called 'gobertane stone'. Rare lime-loving plants, such as wild marjoram, bee orchid, forest vine and brush wreath, grow on that soil. Gobertangesteen was mined here in the neighborhood through underground galleries and was already a good building material in the Middle Ages. The steep walls or slopes in the valley were probably created by excavating that rock.
Natuurpunt
2800 Mechelen Coxiestraat 11.
Website: www.natuurpunt.be
Accessibility & HRC

Starting point:
3320 Meldert (Hoegaarden) Sint-Laurentiusstraat 2 at the Sint-Ermelindiskerk.
Parking:
At the church.
Public transport:
For more information look on www.delijn.be

HRC Starting point.
There are a few catering businesses in Meldert.