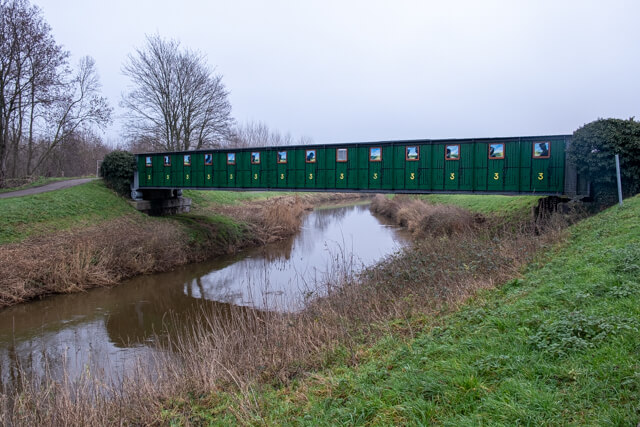 This walk goes through the Demerbroeken nature reserve with alternating reed bushes, hay meadows and woods along the way. On your path you will pass the Maagdentoren and at the Hemmekes you will board an authentic flat-bottomed boat from the 19th century. You can enjoy a beautiful panorama on the Voortberg.

The walk starts at the watermill with “ne quid nimis” above the entrance door (nothing too much). The mill used to be in the possession of the Norbertine Abbey. You go along the bank of the Demer and then through an open landscape with meadows lined with hedges in the direction of Zichem. You go around the village and after a first short climb you get a nice view of the gently sloping landscape. On a old train bed from 1892 you walk in the direction of the Demer where you will arrive at the Maagdentoren. This rare circular tower from the 14th century was built of iron sandstone with lime sand mortar. You are now going through the picturesque village of Zichem. At the church you pass the statue of Ernest Claes and his Witte van Zichem. You go past the watermill to the Hemmekens where you can have a nice picnic on board an authentic, handmade flat-bottomed boat from the 19th century on the banks of the Demer. You cross the railway via a paved part and walk into the nature reserve Demerbroeken. Here you follow the banks of the Hulpe through a beautiful piece of nature. The area was mainly used as hay land and peat cutters also made their appearance, witness beautiful remains in the form of fens and quaking bogs. The last part you climb the Voortberg where you go through a beautiful mixed forest with some beautiful views of Testelt and the surrounding area. You walk back to the starting point past the church of Testelt.

Some paths can be quite swampy

The Maagdentoren was built at the end of the 14th century by Reinier II van Schoonvorst, lord of Zichem. Circular towers are rare in our country. For Flanders, the stock is limited, except for the Maagdentoren, to the towers of Diepenbeek (c. 1450), 's Gravenwezel (first half of the 16th century) and Leut. The façade walls are made of iron sandstone with lime sand mortar. Here and there you can see brick fillings, but this is the result of later renovations.
No extra information.

On the border between the sandy Kempen and the loamy Hageland, the Demer valley between Aarschot and Diest is one of the most valuable valleys in Flanders. Already in prehistoric times, the original landscape of swamps and willow shrubs was gradually reclaimed into a patchwork of meadows and peat pits. The peak of the hay economy was in the second half of the nineteenth century, when the Zichemse meadows were one of the major suppliers for the cavalry in Brussels and other large cities. With the advent of the car, the horse gradually disappeared as an economically important source of power and the need for hay also disappeared. In a vain attempt to make the land profitable, poplar forests were planted en masse. The rest of the valley grew dense with willow domes and alder woods. The iron sandstone of Voortberg, a remnant of a former sandbank, dominates the landscape. Part of the open water has grown over in some places to quaking peat. A second layer with plants such as hollow pipe, cinquefoil and water three-leaf grows on the floating water plants. This way you get a very thick carpet attached to the banks.
Natuurpunt
2800 Mechelen Coxiestraat 11
Website: Natuurpunt
Accessibility & HRC