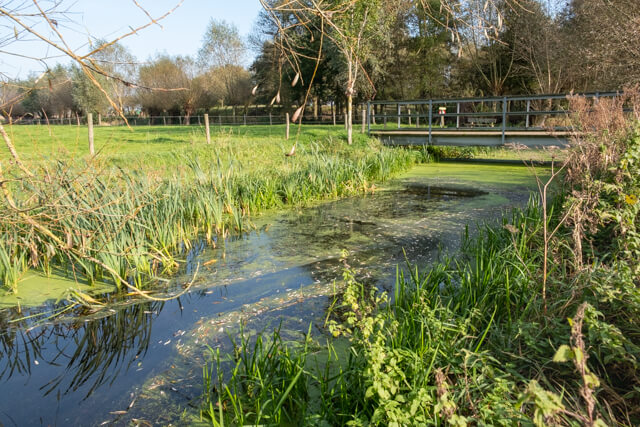 This walk takes you through one of the best preserved natural areas of the Meetjesland, the Oude Kale valley. You walk along the meandering Oude Kale stream, through grasslands and meadows with beautiful pollard willow rows.

You leave Vinderhoute past an old listed mansion and the Schouwbroek castle to go via rural roads in the direction of the Van Vlaenders mill. At the mill you walk into the nature reserve of the Oude Kalebeek, a scenic gem with meadows, rows of pollard willows and numerous ditches. If you are near the castle village of Merendree you will return to the Driesselken and beautiful farms. The tour continues through the nature reserve until you reach the windmill again. From there it goes back to the starting point.

Water-resistant shoes are recommended because the paths can be quite soggy.

The many castles in and around Vinderhoute, including Schouwbroek Castle, Vinderhoute Castle and Gavergracht Castle, were built (or rebuilt) in the 19th century by wealthy industrialists who wanted to live in the countryside. It is not possible to visit, but you can usually catch a glimpse of the domains from the street. You can catch a glimpse of Schouwbroek castle, with its stately lanes, shore bridge and three monumental chestnut trees at the entrance gate.
No extra information.

On the border of Vinderhoute and Lovendegem you walk past the beautiful Van Vlaenderens mill, which has been thoroughly restored and is now used as a residence. The mill, the ridge and the immediate surroundings are protected as a village view. A little further on the Oude Kale river meanders through the low-lying meadows.
No extra information.

Flowery meadows, pollard willow rows and ditches together form one of the best preserved nature reserves in Meetjesland. The Oude Kale, now a stream but once a competitor of the Leie, winds through it. De Kale was connected to the Poekebeek and the Durme, and ended in the Scheldt.
No extra information.

This triangular square protected as a monument dates from the early Middle Ages. A "dries" has traditionally been a square with farms around it and a "watering pit" where the cattle were led to in the evening. The drinking pool on the northwestern edge of the Driesselken is still there.
No extra information
Accessibility & HRC