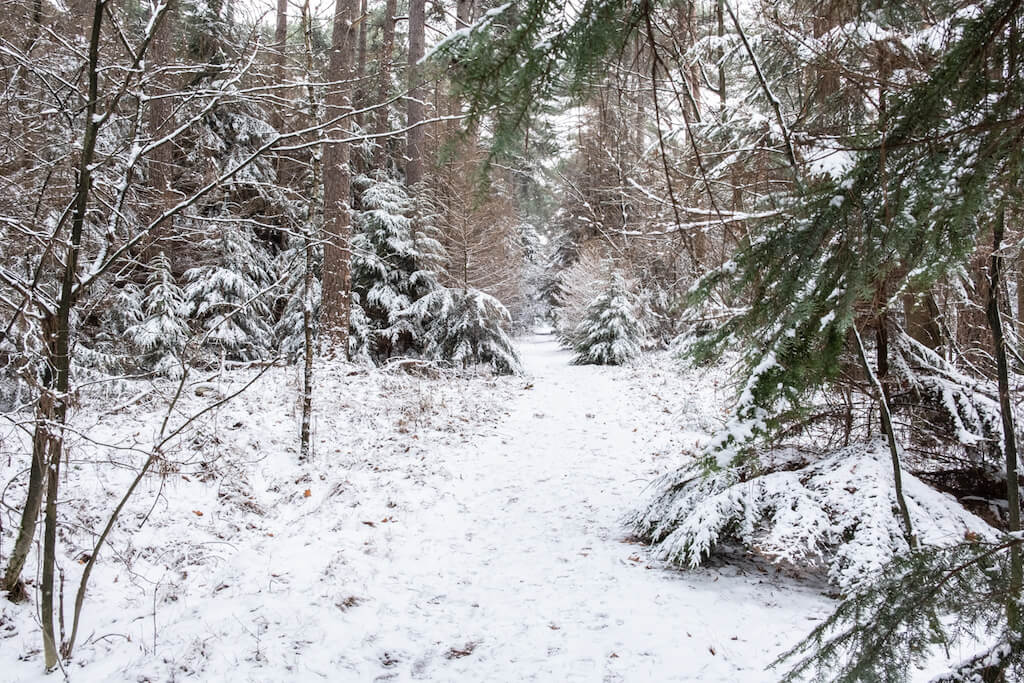 This walk in the nature reserve Hoge Vijvers goes via small paths and wide lanes through this vast forest. It is hard to imagine that there was no forest here until the mid-nineteenth century. At that time peat extraction was still being carried out, as a result of which ponds originated on this higher part of the Kempen, this explains the name 'Hoge Vijvers'.

The walk owes its name to the VZW Talander where fifteen people with intellectual disabilities stay. This oasis of peace in the middle of the sandy Noorderkempen is the starting point of the walk. Via narrow forest paths you go in the direction of the border with the Netherlands. It seems as if the border was drawn on a map with a ruler. What is special is that you also clearly see the border in the landscape. In Belgium, forests were nurtured while farming was being done in the Netherlands. Then you pass the so-called 'military dump of Arendonk', behind the fence is a former ammunition depot of the German army. Between 1962 and 1997 the 81 bunkers on the domain served as ammunition bunker. On the route there are various information boards about the fauna and flora. The chance that you see a deer on this walk is very big, the wild boars are too shy for that.

Near walking node 10 we find at the edge of a Dutch field and next to the fence of the Belgian military domain a white border post number 204 of 1843. Bullet holes disfigure the post. In 1843, the border between Belgium and the Netherlands was regulated by the Maastricht treaty. Border stone 204 was then planted, but actually this point has been a border between both countries for much longer. The bullet holes come from German soldiers from the First World War. They were here to guard the border with the unoccupied Netherlands. During those long hours of standing guard they tested their weapons on the poles. (source: www.verrassingenomdehoek.be)
No extra information.

Until the middle of the nineteenth century there were no forests in and around the Hoge Vijvers. Before the heather was cultivated, the area had a typical heathland management and peat extraction. This created various ponds in this high-altitude area. Around 1897 a large part was forested by a private explorer. The bulk of the domain forest was purchased in 1979 from private owners. You will not find ponds in the nature reserve Hoge Vijvers, but 500 hectares of forest, grasslands and fields. The area is located in the Turnhoutse Kempen, on the territory of the municipality of Arendonk, between the Kempens canal and the Dutch border.
Agentschap voor Natuur en Bos.
1000 Brussel Havenlaan 88 bus 75
Website: www.natuurenbos.be

The bunker complex of Arendonk is a former ammunition depot. Between 1962 and 1997 the 81 bunkers on the domain served as ammunition bunker for the German army. Soon the domain was nicknamed the 'military dump of Arendonk'. When the German army left the domain in 1997, the municipality of Arendonk sold the 90-hectare domain to the department of Defense. The gates of the bunkers are open and offer a shelter for bats. The department of Defense has been planning to sell the domain for years. 'Natuur en Bos' would be an interested buyer. It is an important link between other large forest and nature areas in the region, such as the Regional Forest of Ravels and the forests of Mol-Postel. What added value it could be for tourism, all these forests had to be linked together. (source: www.verrassingenomdehoek.be)
Geen extra informatie.
Accessibility & HRC