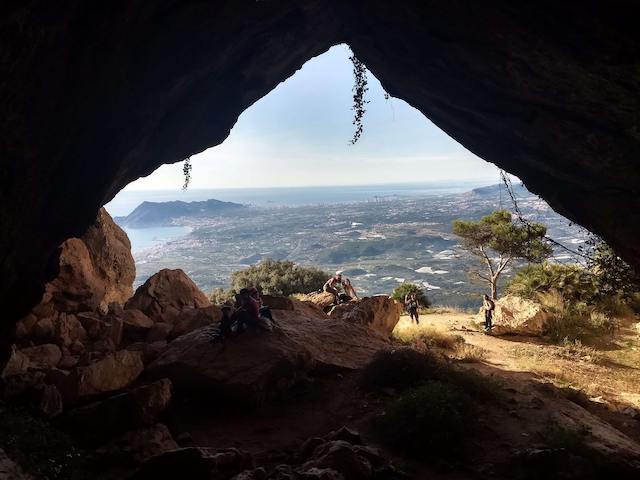 The walk goes to the top of the Bernia from where you have a beautiful view of the surroundings. You also arrive at the ruins of the fortress of Bernia and go through an ancient tunnel where you have to crawl on all fours for about fifteen meters.

Dog: allowed on a leach

The walk goes through the Sierra de Bernia, a small mountain range, to the top of the Bernia at an altitude of 1126 meters. On a wide footpath and a path you walk to the ruins of the fortress of Bernia. From the fortress you start the tough ascent of the Bernia. First you climb over gravel stones and then clamber over the ridge and a secured passage over rocks. Then follows another rock wall of two meters high, once you have conquered it, you follow the rock path to the top. You descend along the same route to the fortress. From the fort you walk to the forat de Bernia. This is a 20 meter long tunnel that has been dug out by water over centuries. The tunnel goes straight through the mountains but you always see light on the other side. You will have to crawl on all fours for fifteen meters. At the tunnel you have a beautiful view of the skyline of Benidorm, the Puig Campana and the Aitana. On the other side you have a view of the Montgo. Past the tunnel you descend via a path to the source of Bernia and then return to the starting point on a wide hiking trail.

The hike can be shortened to 8.5km if you don't go to the top.

On the ridge it can be windy and at the top the weather can quickly turn cloudy and foggy.

The Fort of Bernia is located on the southern slope of the Sierra de Bernia in the municipality of Calossa d'En Sarrià. The fort was built in 1562 but was demolished in 1613, mainly because of its impractical location. Now only a ruin remains. Striking are some preserved roof vaults of the former crew quarters.
Geen extra informatie.
Accessibility & HRC

HRC starting point.
No catering but a picnic area.

HRC on the way.
No catering but a picnic area.