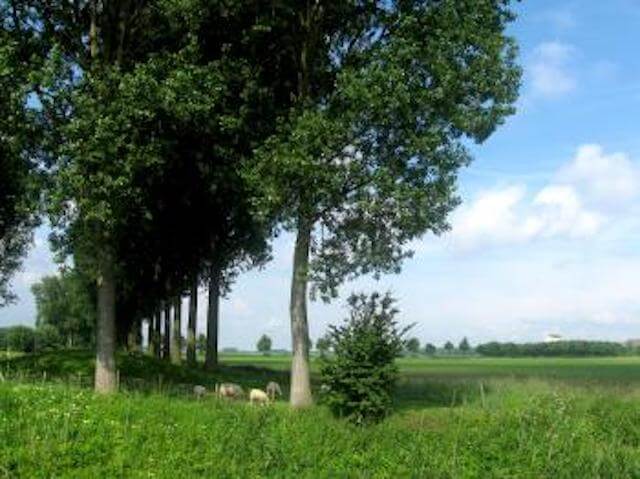 A lot of animals around Zuiddorpe. The Rat, the Mouse, Sheep (dyke) and Bonte cow are just some of the animals you can encounter there. After the occupation by the Spanish, the inhabitants made short work of the Spanish (Catholic) names of streets and neighborhoods. Fort Sint-Jan became De Ratte and Fort Sint Marcus, de Muis.

Battlefield in the Delta.

Where the names come from remains unclear during the detour. But it is clear that Zuiddorpe stands for a strong Zeeland. "We do not tolerate a strange hand here," says the Zeeland national anthem. Between Axel and Zuiddorpe, many fortresses remind us of the battlefield in the Delta in the Eighty Years' War.

The Zuiddorpe detour starts on the peaceful village square with its old lime trees and partly follows the existing walking routes on church roads. On these dry, sandy paths - shortcuts along and across the farmland - people went on foot to the church (or to one of the many cafes) on Sundays. A few years ago they were restored and now you can walk there.

Along the way, you naturally dive into the history of Zuiddorpe. in addition to the church paths, you will find traces of peat extraction (moernering), the buckwheat seed that according to tradition would have been introduced in Zuiddorpe, the Marian worship with the replica Lourdes cave in the cemetery and of course the Line of Communication, the dike that was built from 1634 onwards. Spanish fortresses from Hulst to Sas van Gent connected with each other. The line - over which you walk a short while - was not only intended to stop the advancing States, but also served as a fast connection route for the military and as a seawall. Inundations had created a wide stream channel between Axel and Zuiddorpe.

At node 38, past the statue of Vrouw Moere, the mother figure who watches over the farm workers, you turn right and, a little further on, turn left into the Wegelstuk. At the end of this church path, at Sint-Janstraat, no soldiers, but geese watch over the territory.

Be sure to take a tour around the former fortress of Sint-Jan at node 37. You will then see the canal - originally twenty meters wide - and the square elevation on which a beautiful farm now stands. There was no fighting, the fort was mainly a sentry. In 1645 it came into the hands of the Staatse. You are now on the unpaved Binnenweg, parallel to the Buitenpolderweg, through the De Ratte grove to Fort Sint Marcus (De Muis). This fort from 1586, then extensive, is hardly recognizable in the landscape. Only the bend in the road and the slight slope betray its location between Sint Marcusstraat and Blijpolderseweg. In 1673 it was swallowed up by the waves.

At node 90 you climb to the right, the Schaapdijk. Again a church path. The name immediately makes it clear what the dike was for; it was the route of the shepherd and his sheep. For today's walker, it mainly offers a nice view of the Catholic Church and the other battlefield, that of the standing seesaw.

Fort Sint-Jan is part of the State-Spanish Lines. It is located a few hundred meters west of Zuiddorpe, and now forms the hamlet De Ratte. This fort was founded by the Spaniards in 1634 and included in the Line of Communication between Hulst and Sas van Gent, which was located south of the Axelse Gat. The line comprised a series of fortresses mainly for reconnaissance purposes and to counter the incursions carried out from the Land of Axel on the Spanish territories. In 1644 and 1645, however, Sas van Gent and Hulst respectively were again conquered by the Staatse, and thus the fort came back into the hands of the Staatse. When the definitive boundary was established in 1664, the function of the fortresses disappeared.
No extra information.

Fort Sint Marcus was a fort that was located near the present hamlet of De Muis, 1 km north of Zuiddorpe. The fort was built by the Spanish in 1586. It was a large square fort, with four strongholds and a central square. It was included in the Line of Communication between Hulst and Sas van Gent. In 1645 the fort came into the hands of the Staatse. It soon lost its military significance and in 1673 the fortress was abandoned.
No extra information.
Accessibility & HRC