The Abbey of Orval 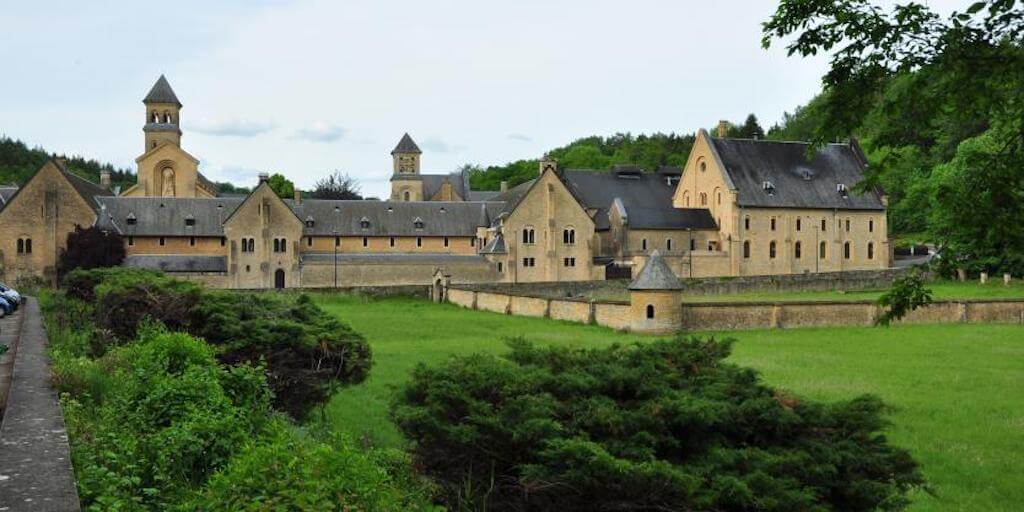 The Abbey Notre-Dame d'Orval, founded in 1132 and one of the most beautiful Cistercian abbeys of Belgium, is the starting point of this cross-border course of about 11 kilometers. Even though one can not visit the famous brewery and the abbey itself, the ruins of the old abbey are equally interesting. The uniform ruins (protected monument) of the old abbey dating from the 12th to the 13th century, as well as the modern buildings of the new Orval abbey, are well worth a visit.

The Abbey of Orval

The construction of the new abbey began in 1926, on the foundations of an old building, which was destroyed during the French Revolution. The source, the ancient rose windows and the beautiful garden with medicinal herbs are among the highlights of the visit to the ruins. The museum tells the history of the abbey and shows old works in wrought iron, a model of the abbey and paintings from the 18th century. The route goes from the Abbey of Orval to the village of Chameleux and if desired you can make a detour to the French village of Villiers. From Chameleux it goes further in the direction of the Gallo-Roman site of Chameleux to return to the starting point.

The Abbey Notre-Dame d'Orval settled in the Gaume region in 1132. The monastery is known for its history and spiritual life, but also for its Trappist beer and typical Trappist cheese. In 1070 Italian monks settled in the county of Chiny in Belgium. The construction of a church and a small village had started shortly before. Ten years later the original monks reformed their community to the rule of the Carthusians. In 1132 the Carthusians ran into problems for various reasons. Count Albert of Chiny asked Bernardus of Clairvaux to take over the foundation. He sent seven monks from the Trois-Fontaines abbey. The already present canons joined the newcomers in the order of the Cistercians. Around 1252 the monastery was destroyed by a fire. The reconstruction took about 100 years. During the 15th and 16th centuries, several wars between France and neighboring regions took place (Burgundy, Spain), which had consequences for Orval. In 1637 the abbey was destroyed, but it was rebuilt. In 1793 the abbey was finally destroyed by the French revolutionary troops. The site was sold as a national property and served as a quarry for a century. In 1926 the then owners donated the site to the new vzw l'abbaye de Notre Dame d'Orval, with the intention of setting up a new Trappist convent as the daughter department of La Grande Trappe. The first monks, however, were not from La Grande Trappe, but from the Abbey of Sept-Fons. They returned to Europe from a failed attempt at monastic foundation in Brazil. For 22 years, from 1926 to 1948, a completely new abbey was built according to a design by architect Henri Vaes. This was mainly the work of the Gentenaar cathedral Albert-Marie Van der Cruyssen, who became the first abbot in 1936. In order to be able to finance the large buildings, various collection activities were set up. For example, special stamps were issued with surcharge. The cheese factory (1931) and the brewery (1932) were set up to generate the necessary financial resources, and they seemed to be working from the start. After the end of the construction works, this income was used for social and charitable purposes.
Abbey of Orval.
6823 Villers-devant-Orval Orval 1.
Website: www.orval.be

At 4 km south of Florenville is the Gallo-Roman site of Chameleux (1st to 3rd century). Once the Roman road Reims-Trier came here a fort was built for the soldiers and the travelers. Archaeological excavations have uncovered the remains of this relay. Information boards give visitors an idea of life here during the Roman period.
Maison du tourisme du Pays de la Semois entre Ardenne et Gaume.
6820 Florenville
Esplanade du Panorama 1.
Website: www.soleildegaume.be
Accessibility & HRC