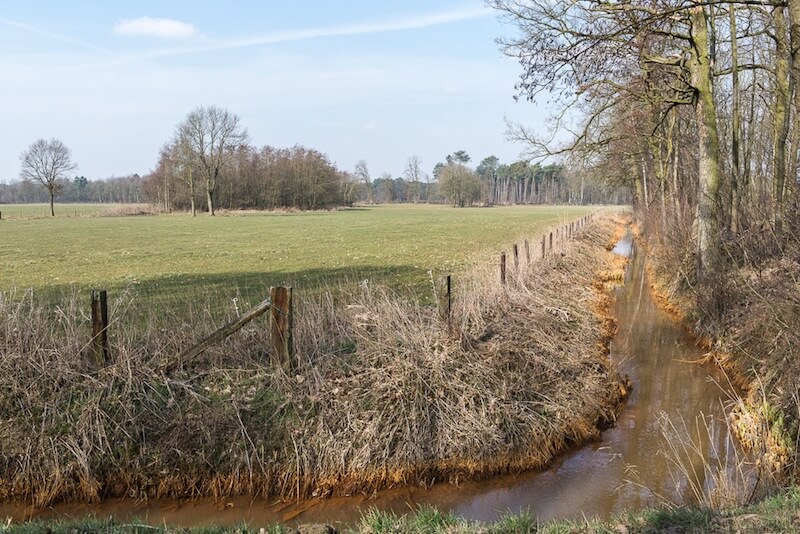 This walk in the Valley of the Three Brooks goes through the nature reserves Dassenaarde and Groot Asdonk and shows the transition between the Kempen and the Hageland. Due to the alternation between wet valley soils and dry ridges, you will find a wide variety of plants and animals here. The region offers beautiful views over pollard trees, hedges and wood edges.

The trail first goes along the edge of the Prinsen forest in the direction of the Eikelenberg. On this Diestian hill you walk via a small traffic-calmed paved road to the nature reserve Dassenaarde and then return to the starting point via the Bolhuis chapel through the Groot Asdonk nature reserve.

The Hageland hills originated during the tertiary geological period from 65 million to 5 million years ago. Then the sea flooded many parts of our country several times before retreating. Time and again this resulted in deposits of thick packs of sand and clay, also known as the Diest formation. Some sandbanks are 55 meters high. The name of the Dassenaarde nature reserve recalls the badgers that used to have their castles there until the late 1950s. The badgers does not appear here any more. From the Bolhuis chapel you look out on the beautiful valley in which the Kleine and de Grote brook merge into the Zwarte brook. The Bollhuis chapel, also known as the white chapel, is the oldest chapel in Molenstede and dates from 1775. The old farmhouse "Bolhuis" is a typical Kempian long gable farm that consisted entirely of loam until the end of the nineteenth century. At the moment stone has been built around it and you can only see some remnants of the mud walls inside the farm. The walls of this farm are on foundations of the local iron sandstones. This nature farm plays an important role in the management of the surrounding nature reserve Dassenaarde. The animals that are used in nature management find shelter here.
No extra information.
Accessibility & HRC