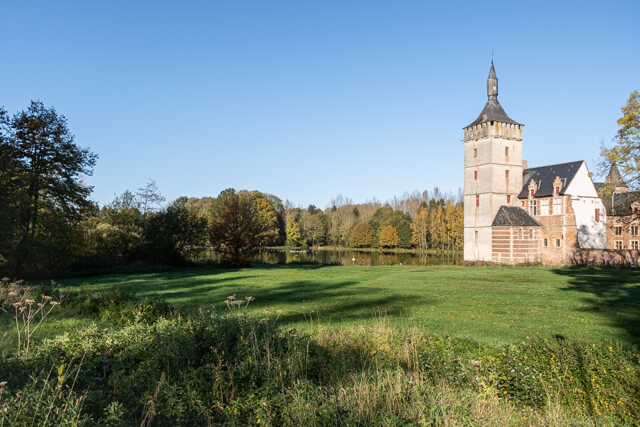 The walk starts at Horst Castle, the home of cartoon character De Rode Ridder. Through an open landscape it goes in the direction of Troostemberg forest. After a detour through this beautiful beech forest, a descent to the green valley from the Winge stream to the Gempe mill begins. Along rolling fields with beautiful views of the Hageland Hills, it goes back to the starting point.

The green valley of the Winge stream.

You depart from the castle of Horst and walk along one of the fish ponds of the domain. You walk through an open landscape in the direction of the Troostemberg forest, which you can already see far away. After a short climb you walk through this dry slope forest with beautiful beech trees. From dry to wet then, the valley of the Winge stream. You go through a fairly wet area, where the vegetation has completely changed, to the Gempemolen. This watermill is also a pleasant brasserie where walkers are very welcome. From there you continue through an open rolling landscape, past fields in the direction of the picturesque Saint Joseph's chapel, along the way you have beautiful views.

The paths can be quite soggy.

This moated castle lies in the green valley of the Winge stream, between the hills of the Hageland. The lords of Horst already lived here in the 13th century, the characteristic square keep dates from the 15th century. In the 17th century, Maria-Anna van den Tympel, the noble inhabitant, had two wings built around the courtyard and carried out important embellishments. She also had the wagon house built, where the visitor center with heritage shop and a cozy regional guest house are now located. The castle, with its large pond and moat, is home to cartoon character The Red Knight by Willy Vandersteen.
No extra information.

The name refers to the noble family de Troostemberg, who owned it until 1981, now it is the property of the Flemish Region. The dry slope forest is characterized by special beeches, sweet chestnuts and birches.
No extra information.

Henry I, Duke of Brabant, donated a piece of land with a watermill in Gempe to the monastery of Gempe in 1229. The monastery was also entitled to the large Gempe pond, which supplied water to power the mill during dry summers. At the beginning of the 17th century, the monastery was allowed to move the Molen brook over more than 600 meters to increase the decline of the mill. The monastery has leased the mill to a miller for a long time. When the monastery was abolished by the French Revolution, the mill finally came into private hands. It was almost always used as a grain mill until around 1950. Since 1944, the mill has been classified as a monument. Over the years, the mill was neglected and fell into disrepair. In 1991 the mill was purchased by Haacht Brewery. The mill house was renovated and transformed into a tavern. A completely new oak wheel was built, the lock work and the mill gutter were replaced.
Wikipedia
Website: www.wikipedia.org
Accessibility & HRC