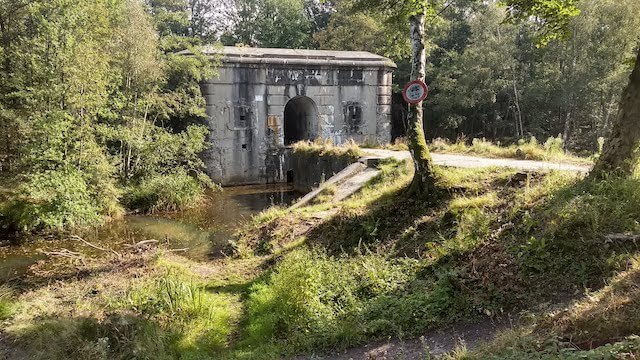 Walk from the Klein Vliegveld of Brasschaat to the domain De Uitlegger and then around the Fort of Brasschaat.

We start at the airport of Brasschaat. This is one of the oldest airports in Belgium. The airport is part of the military base of Maria-ter-Heide, which is part of the fortress belt around Antwerp. Nearby is the Site Gunfire Brasschaat Museum. From there we turn left into the Klein Schietveld and via a railway, used by rail bicycles, we arrive at the Antitankgracht.

The Antwerp Antitankgracht is an artificial watercourse that makes a large quarter circle around the city of Antwerp. The moat has a length of about 33 km and is at least 6 meters wide. It connects the Scheldt near Berendrecht with the Albert Canal in Oelegem. The moat was constructed between 1937 and 1939 with the intention of stopping enemy (German) tanks and other rolling stock before they could reach Antwerp. Meanwhile, the Antitankgracht has evolved into a large nature connection area.

Via a wide avenue we reach the De Uitlegger domain, where we walk through. Nature reserve De Uitlegger is about 88 hectares in size and located on the border of Kapellen and Brasschaat. The domain owes its name to a surveyor who used to live here. The two world wars left a clear mark on this domain: bunkers, trenches, military railway,…

After the De Uitlegger domain, we arrive at Fort Van Brasschaat. The Fort of Brasschaat was built in 1909-1912. After the First World War, the armament was modernized and the fortress building adapted to withstand gas attacks. In the late 1970s, the Belgian army tried to demolish the fortress by blowing it up. That was only partly successful: only the left wing of the fort was destroyed. The bridge was blown up, so the fort itself is not accessible. From there we walk around the fortress canal and via the Klein Schietveld domain we return to the departure point.

Due to the proximity of the large shooting range, you can sometimes hear bangs from the target practice. Especially hikers who bring their four-legged friend with them should take this into account.