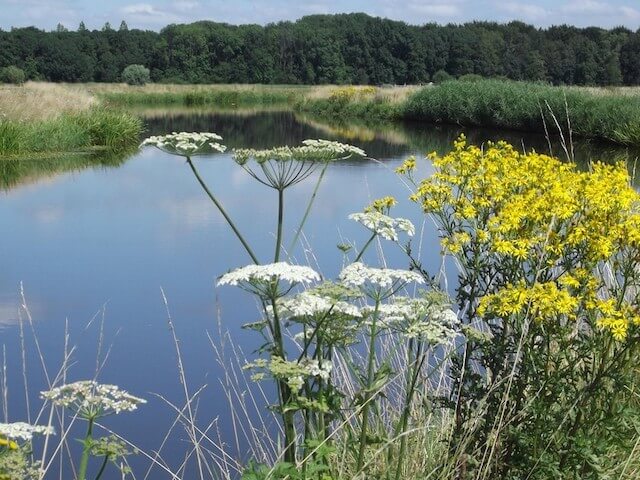 Zegenwerp and Venrode are estates in the vicinity of the river Dommel and estate Eikenhorst in the vicinity of brook de Essche Stroom. At the Halder hamlet, the river Dommel and the Essche Stroom stream come together. The Zegenwerp estate has been laid out in an English landscape style with stately avenues, rolling grasslands, forests and farmlands. In the estate you pass some old farmhouses and a stately mansion Huize Zegenwerp. Venrode Estate has a particularly beautiful area surrounded by forests with a burial mound from the Bronze Age that was discovered in 2013 and is 5000 years old. The Eikenhorst estate was built in 1806 in an English landscape style with a country house, water features and various monumental oaks, beeches, chestnut trees and exotic solitary trees in the park. The Halsche Beemden is a wide brook valley with a new, narrower and shallower brook dug along the canalized stream the Essche Stream. This shallower brook has wide curves, meanders, in the wide and open brook valley. Ponds have been dug in the stream valley and there is room for flowery grasslands.

The present house was built shortly after 1779, when it came into the possession of De Roo van Wulverhorst, on the site of a much older house on the Dommel. Zegenwerp is a 70 ha estate that is located south of the bowl of the Dutch town of Sint-Michielsgestel and that belongs to the foundation Het Brabants Landschap. The estate is located on the west bank of the Dommel. It is an old noble estate that was purchased in 1809 by Baron Willem Arnold Alting Lamoraal van Geusau, who was mayor of Sint-Michielsgestel. In 1828 he sold it again.
No extra information.

Mill The Genenberg, a flour mill from 1841 that worked until 1964 and was subsequently converted into a home.
No extra information.

At Venrode you immediately think of broad hems along the fens, hidden deep in the dark pine forest. In early spring the banks of the fens are completely red colored by the gale. Almost nowhere as much of this strongly scented shrub grows as here. Before hops were added to beer as a seasoning, gagel served that purpose. The pope put an end to it. It would not only be intoxicating, but also toxic. That has been obsolete for a long time and Gagel beer is back on the market again. In 2013, a 5000-year-old Bronze Age burial mound was discovered.
No extra information.

This estate is laid out in an English Landscape style with winding paths, winding ponds, vistas and above all a lot of old trees with detached red beeches in the lawn. The country house is centrally located from where so-called sight axes depart.
No extra information.

The Nieuw Herlaer castle is located in the hamlet of Halder, the current buildings largely date from the nineteenth century and the fifteenth-century octagonal stair tower has been preserved from the older buildings.
No extra information.
Accessibility & HRC

HRC starting point.
Various restaurants and cafes around the square.

It may take a few minutes for the file to appear in your mailbox.