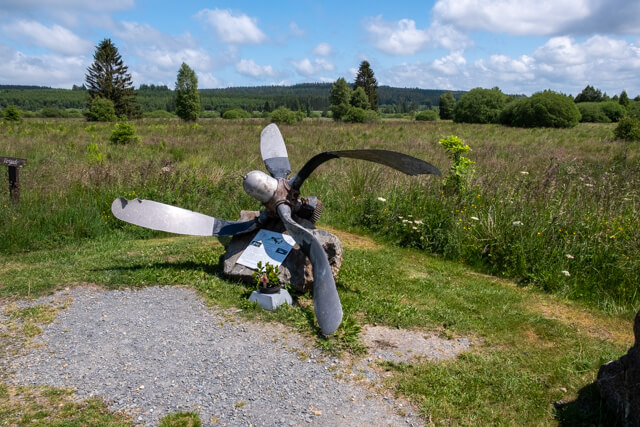 A walk from the old station of Sourbrodt to the source area of the Rhur, which looks black like all peat rivers. Through the bogs of Sourbrodt you walk through the forest of Grand Troupa to the Croix Des Russes, an Orthodox cross in memory of Russian prisoners who tried to survive here in a German labor camp during the Second World War. Then you walk along the western edge of the peat bog to a memorial with the Inflected Propeller of an allied aircraft shot down here during World War II.

Source area of the Ruhr.

From the parking lot you walk along the old railway line to the Nature Reserve of the Kleine Roer. You will pass through an open landscape and peat area, cross the Nesselo and go through the forest of Grand Troupa to the Croix Des Russes. From the cross you walk on a path along the edge of the peat area to the Bent Propeller, where there is also a memorial stone that commemorates the fallen soldiers. From the hamlet of Bosfagne you walk on a paved road back to the starting point.

In the beginning there was only one stop here, but soon a station was needed. An increase in the number of trains, the Elsenborn camp and the thriving industry companies revived Sourbrodt. On the ground floor of the station there were spaces for the station master and train controllers, two counters and a left-luggage office. The station café was particularly important. This was only accessible to those in possession of a valid 1st or 2nd class ticket. Fiery Elias also contributed to the flourishing catering industry at the station. The soldiers of Elsenborn also used this neighborhood train, which was intended for the transport of animal feed and straw, to go out. Many cafes got a somewhat bad reputation. For example, the pastor Pietkin warned his faithful one day from the pulpit: This train goes to hell.
No extra information.

The Kleine Roer is a side stream of the Rhur that rises in the vicinity of the Belgian village of Sourbrodt in the wet grasslands. The water of this brook is clear, in contrast to that of the Rhur, which rises as a peat stream in the high moor. There is also a nature reserve around the small Roer. This consists of a mosaic of hay meadows, bogs and acidic marshes. Peat was planted in the high moor in the early 20th century. The peat was then taken to Sourbrodt station by wagons.
No extra information.
Accessibility & HRC