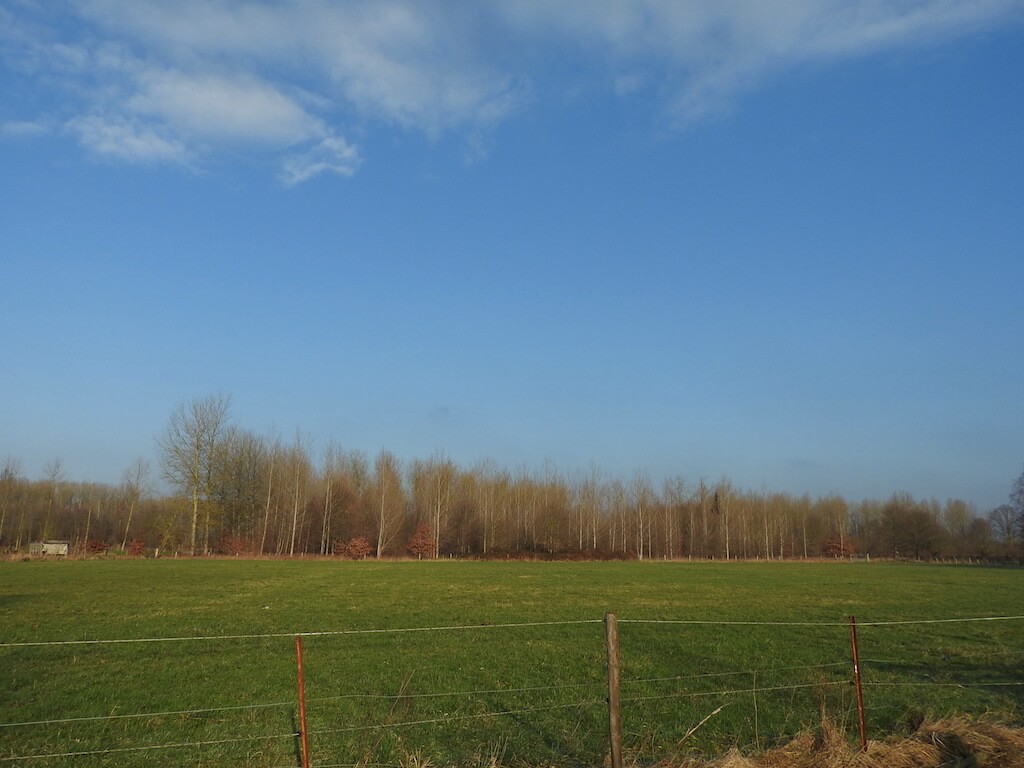 Treinstapper, how dou you translate this in English? Train stepper? Treinstappers are walks from railroad station to railroad station by Long Distance Paths (GR). Flemish Brabant still has many beautiful unpaved roads. On this treinstapper you get acquainted with a portion of those wonderful paths. Those who leave in Wespelaar end up in Haachts Broek, a beautiful nature reserve already after 1 km.

Pretty quickly you are in the quiet village of Wakkerzeel. Between Wakkerzeel and the Mill of Rotselaar you can enjoy a long lane with typical landscapes of the Dyle valley. A piece of paved road takes you later to the banks of the Dyle, where white swans work alongside an idyllic landscape. Beautiful surroundings with a pleasant change from small forests and green meadows lead you to the high St. Gertrudis forest. After some climbing and lowering you are on the roof of Leuven, the Kesselberg. Admire the skyline of Leuven at the orientation table. Through a succession of narrow paths between the residents' gardens you reach the tree at the entrance of the Provincial Recreation Domain. From here you follow the city version that crosses this impressive park. For your final destination, the Leuven station, you still have to go 1 km.

The Antitankgracht, the Haachts Broek and the Schorisgat together form the beautiful green belt of the Leibeek valley. The Antitank Canal is a remnant from the Second World War, where amphibians now give croquette concerts. In the Schorisgat you can walk on the oldest road of Haacht, laid out by the Celts. The Haachts Broek is a wet area because the loamy sand and clay soil is difficult to penetrate. Just because the area is so rich on water, it was spared from buildings. The wet grounds were used as pasture, the higher and thus drier grounds were suitable as fields. This is a fairly large nature area with a lot of variation. It is a patchwork of forest, meadow, field and thicket. With the aid of grazing, we try to give the management a bit of control. Besides enjoying the beautiful nature, you can also discover a portion of heritage here. This is how you can view the Antitank Canal, which was built in 1939 and is recognized as a war memorial and nature reserve. Its aim was to stop armored vehicules during a hostile invasion. The Antitank Canal formed part of the KW line: it ran from Koningshooikt to Wavre. Near the Antitank Canal you can discover the remains of the Castle of Roost. The castle has a rich past that dates back to the fourteenth century. Only a part of the outer moat has remained visible.
Natuurpunt
2800 Mechelen Coxiestraat 11
Website: www.natuurpunt.be.

The Kesselberg is a nature reserve owned and managed by the City of Leuven. This 75m high hilltop towers over the steep flanks above Kessel-Lo and Wilsele. The Kesselberg is part of a contiguous hill-chain with, among others, the Lemingsberg, the Begijnenforest and the Chartreuzenforest. It extends over a length of 300 m and is flattened at the top. The nature reserve (about 12 ha) is located at the western end of the hill, with a panoramic view over the surrounding area. It is a protected landscape and rich in different vegetation types. Eye-catchers are the stony vegetation and the varied forests on the steep flanks. The management is focused on the recovery and conservation of these natural vegetations and is partly done by a grazing management with sheep. The Kesselberg domain is also of historical value. There is another geological quarry where iron sandstone was formerly used, which was used for the reinforcements around Leuven. Once upon a time a castle had to be built on the Kesselberg, but the last traces of this were removed in the 19th century.
Erfgoedcelleuven
3010 Leuven
Website: www.erfgoedcelleuven.be.
Accessibility & HRC

HRC On the way.
No information available.