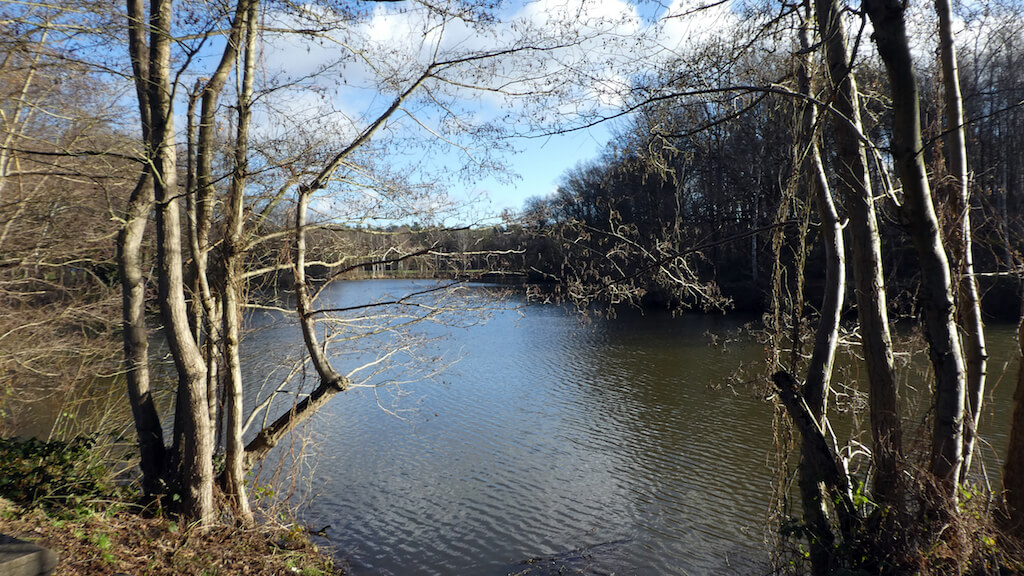 This beautiful walk goes by nodes of the Kempense Hoven hiking network along the Antitank Canal to the Fort of Oelegem and then direction of the Castle Estate Vrieselhof.

In the valley of the Groot Schijn, where Antwerp ends and the Kempen start, lies the impressively quiet castle estate Vrieselhof. Through a variety of biotopes, it gets a different look every season. Along the way is enjoying stately beech drift, a special field with gale and heather sections are very different from the beautiful unpaved paths through the forest.

In case of humid weather, sturdy walking shoes are recommended.

The Antitank Canal is an artificial water course that forms a large quarter circle (from north to east) around the city of Antwerp. The canal has a length of about 33 km and is at least 6 meters wide. She connects the Scheldt to Berendrecht with the Albert Canal in Oelegem. The canal was built around 1939. As anti-tank ditch in order to stop enemy (German) tanks and other vehicles before they could reach Antwerp. The antitank canal did not play any significant role in Fall Gelb, so the eight-day campaign. In the meantime, the Antitank Canal has evolved into a large nature connecting area, which connects different nature areas and forests and allows migration of animals and plants between these areas.
No extra information.

The fort of Oelegem is part of the Defense Line of Antwerp. The idea behind this was that Antwerp was the most suitable as the last entrenchment until the help of allies could arrive. The fortress belt would consist of eight Brialmontforts (built in 1859) in an 18 km long belt from Wijnegem to Hoboken. After the Franco-German war of 1870, it was initially decided to build three bridge fortifications and then to build an outer line, which was adapted to more modern weapons. This last plan was ratified by law of 30 March 1906. This Main Resistance included 16 forts and 10 sconces on the right bank and 5 forts and 2 sconces on the left bank. After expropriation of the land, the construction of the fort was allocated on 27 February 1909 and had to be completed by 1 July 1912 at the latest. At the beginning of the First World War, however, the fort was still far from operational. For example, there was no ammunition available. The fort serves as a wintering reserve for bats. According to counts in 2014, about 1234 copies of a dozen species overwinter. Since 2014, the fort is not only the reserve for bats in Flanders but also the second largest in Belgium. The Fort of Oelegem has been the most important wintering place for a number of endangered species such as the Fringes. In the summer months the fort is accessible on certain days and by appointment. The annual open house day always takes place on the last Sunday of April.
No extra information.

The domain Vrieselhof consists of different parts. The actual castle park took shape in the 18th century. Alfons-Ignace van Halmale laid the structure on the estate, including the one kilometer long drive from the castle to the Rundvoorstraat, around 1750. Old Ferraris maps clearly show this structure. The grounds next to the drift were not all owned by the lord of the castle. Originally the domain ran to the Heidebeek and it was surrounded by forests and hayfield. Behind the castle in the same time a star-shaped structure was created, the so-called 'Sterbos', in the 21st century a play forest for children. At the beginning of the 20th century, the park was redesigned in an English landscape style, which was much less strict. Among others, the U-shaped hof moat dates back to that time. Large parts of the older floating structure are still recognizable. The Heidebeek on the domain Vrieselhof. Several waters cross the area of the Vrieselhof: next to the Hofgracht there are the Heidebeek, the Groot Schijn, the Rosse Beek and the Vrieselbeek. The Heidebeek borders the original park area. However, the northern part beyond this stream also belongs to the provincial domain Vrieselhof. It is a piece of Schijnvallei, through which Groot Schijn runs, a river that rises in Westmalle and flows into the Scheldt. The Schijnvallei has retained the characteristics of the 19th century. Between the Groot Schijn and the Heidebeek lies the Vrieselgoor, a swampy wooded area with a partial repelper cellation: repels raised ground with in between drainage ditches. On the other side of Groot Schijn lies the Goor, a low-lying swampy country. A part of valuable blue grassland belongs to the Goor. In 2013, the province purchased additional pieces of land to better preserve this bluegrass land. The eastern part of the domain between Heidebeek and Groot Schijn is bordered by the Rosse Beek. On the other side of this stream, outside the domain Vrieselhof, lies the Fort of Oelegem. The part next to the Rosse Beek, between the Heidebeek and the Groot Schijn, is an old swamp forest that is subject to seepage and where no maintenance work is being done. This piece of forest is called 'het Diep'. De Vrieselbeek runs within the original park area between the castle and the star forest.
Remise Vrieselhof
2520 Oelegem Schildesteenweg 97
Website: www.remise-vrieselhof.be.
Accessibility & HRC