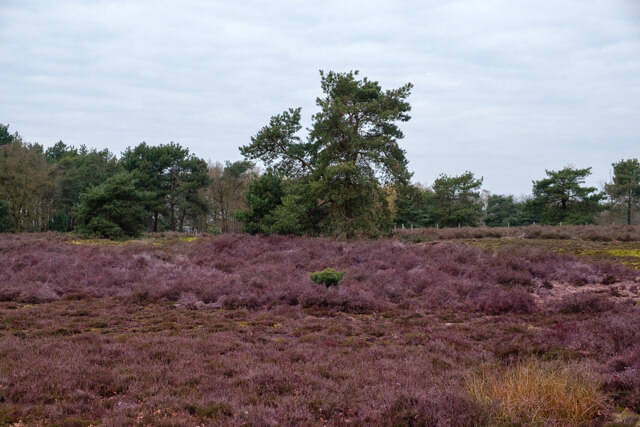 This walk goes through the Hoogmoerheide nature reserve where forests and dry heather alternate. Then the route goes in the direction of the nature reserve Het Moer, traditionally a swamp that forms the original source of the Noordermark. The last part goes through landscape park 't Zwart Goor. In addition to the heathland, you will pass the Grote Vijver with its romantic boathouse.

Cross the road and follow the dirt road to node 14. Here you follow the Gelsmoerloop on the right, at node 15 you cross the bridge and follow the brook for a short while. The path bends to the left and you enter the nature reserve Het Moer. Immediately noticeable are the pools scattered in the landscape. At node 51 you turn left and first follow the Gelsloopje for a while and then go next to the Noordermark. At node 26 you can see the remains of the Moer mill in the south. You turn left and cross bridges and a beautiful boardwalk through the area. At node 52, turn right, at node 89, turn left again and follow the forest road until you reach the Acaciaweg. (KP 88) Here you turn right and you will end up on the Verbindinsstraat. Turn left here, you will pass node 78 and continue to node 79.

Several picnic benches along the way.

Some paths can be quite swampy.

The Hoogmoerheide is a remarkably dry heath in the middle of the Turnhouts fens area and Het Moer. The non-profit organization Natuurpunt has carried out a number of management works here over the years, which resulted in the restoration of the heather vegetation. Bush heather dominates in the dry areas, while heather and pipe straw flourish on slightly moister soils.
No extra information.

Het Moer, traditionally a swamp, is the source of the Noordermark. At the time, a settlement was established on Bergske, called Craytenborch or Krijtberg. The residents got fuel for the fireplace from Het Moer. The peat layers were dredged with a fork, cut into chunks and placed in dry piles. The peat blocks gave heat but no flame. Later on they came up with layers of clay with which stones were fired in clamp kilns. Willows were also felled in Het Moer, used to make seats for church chairs, among other things.
No extra information.

De Pelseneer - De Chaffoy from Mechelen was a manufacturer of seats from willow twigs. He had a stone windmill built in 1844, used to grind grain but also to dewater the Moer with a paddle wheel. In 1889 the mill was converted into an upper barrow by Adriaan Gilis, his brother Miel later used it to store wind energy in accumulators by means of a generator. The stone hull recalls a glorious past.
No extra information.

The Zwart Goor evolved from a spacious park and country retreat of a large landowner to a preventorium acquired by the Emmaüs non-profit association. Currently, the Emmaüs op 't Zwart Goor offers shelter to 400 adults with a mental and intellectual disability. Their large pond with romantic boathouse is the most idyllic spot in Merksplas. Natuurpunt converted the old and monotonous pine forests into a heathland where one can still admire the relief of the rare inland dunes. The historic lanes were rejuvenated.
No extra information.
Accessibility & HRC