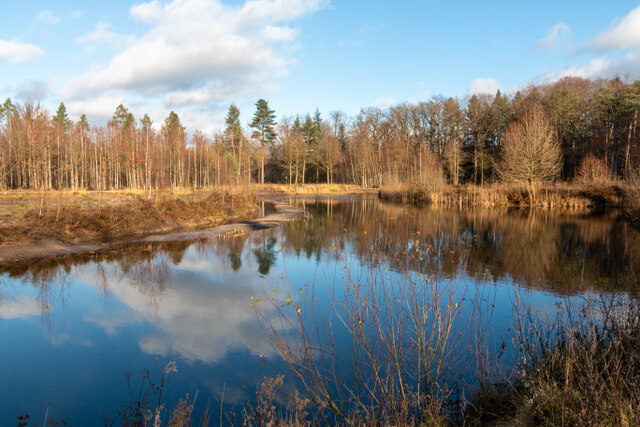 This beautiful walk goes from the Hallehof castle park through the Halse woods to the rear of the Fort van Oelegem and the castle domain Vrieselhof. You walk past the fort, the Antitankgracht and mixed forest back to the Hallehof.

Way mark: Nodes of the walking network and own description

The walk starts in the beautiful castle park Hallehof. You go around the pond and past the castle to the valley of the Groot Schijn. You enter the Halse woods via a wide dirt road. You reach the canal at the rear of Fort van Oelegem via beautiful forest roads and small forest paths. From here it continues to the castle domain Vrieselhof. You go around the castle to a special field with gale and heather and on a newly constructed plank path. Suddenly you are at the front of Fort van Oelegem. You will now follow the Antitankgracht for a while and then walk back through mixed forest to the Hallehof, where you will pass an impressive old Atlas cedar.

Some paths can be quite soggy.

In the beautiful castle park of 25 hectares you can walk, enjoy and relax. You will discover romantic corners, an old farm and a beautiful building that used to belong to the farm. The eye-catcher of the municipal park is the castle, which the De Borrekens family built in 1902. Between 1981 and 2008 it functioned as a town hall.
No extra information.

The fort of Oelegem is part of the Defense Line of Antwerp. The idea behind this was that Antwerp was best suited as the last bulwark until the aid of allies could arrive. The fort serves as a wintering reserve for bats. According to counts in 2014, 1234 specimens of ten species overwinter. Since 2014, the fort is not only the largest bat reserve in Flanders, but also the 2nd largest in Belgium. Fort Oelegem has been the main wintering place for some endangered species such as the Frill-tailed tail. In the summer months the fort is accessible on certain days and by appointment. The annual open day always takes place on the last Sunday of April.
Fort van Oelegem
2520 Oelegem Goorstraat 19
Website: Fort van Oelegem

The Vrieselhof domain consists of different parts. The actual castle park took shape in the 18th century. Alfons-Ignace van Halmale established the lane structure on the domain, including the one-kilometer-long lane from the castle to Rundvoorstraat, around 1750. Old Ferraris maps already clearly show this structure. The land next to the avenue was not all owned by the lord of the castle. Originally the domain ran to the Heidebeek and was surrounded by forests and hay land. Behind the castle, a star-shaped lane structure was built at the same time, the so-called 'Sterbos', a play forest for children in the 21st century. At the beginning of the 20th century, the park was redesigned in an English landscape style, which was much less strict. The U-shaped moat, among other things, dates from that time. Large parts of the older floating structure are still recognizable.
Remise Vrieselhof
2520 Oelegem Schildesteenweg 97
Website: Remise Vrieselhof
Accessibility & HRC