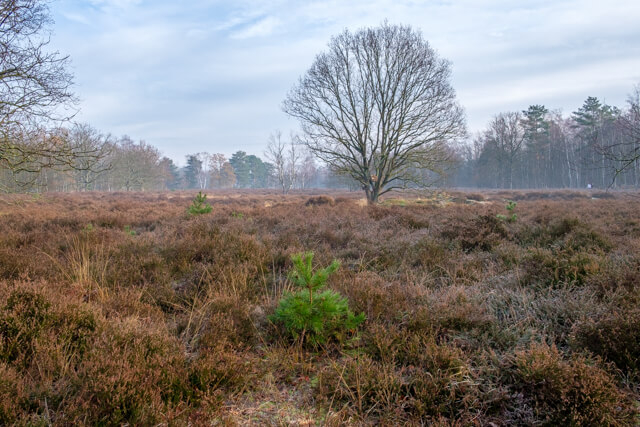 A beautiful nature walk along the Fort of Kessel, through the Kessel Heather and along the Kleine Nete to the Steenbeemden nature reserve.

The walk at Kessel train station and takes you to the Fort of Kessel. The Fort was built as part of the large defense line around the city of Antwerp. You go around the moat of the fort and you notice that there are many tall oaks and willows growing. Bats are permanent residents of the fort. You now walk through a mixed forest in the direction of the Kessel Heather. You traverse this beautiful piece of nature with alternating heather, coniferous and deciduous forests and sandy plains. From the heath you walk on traffic-calmed roads to the banks of the Kleine Nete. You follow the meandering Kleine Nete and enter the Steenbeemden nature reserve. The liquid-taking system was an old agricultural technique, in which hay meadows along rivers are regularly irrigated with fertile river water. You go through the Steenbeemden and an area called De Kromme Ham, an old river dune. The route follows the Emblemsesteenweg for a short while before passing through mixed forest to the Elst brook. Here you come back to the built-up area of Kessel and at the end of the walk.

The Fort was built as part of the large defense line around the city of Antwerp. The construction of the fort started in 1909. When on August 4, 1914, the German troops cross the Belgian border, the fort is not yet completely finished. Commander Piraux and his men do everything they can to make the fort ready for combat. From September 29, 1914, the fort takes an active part in the fighting to repel the Germans. Because of its active intervention in the fighting, the Germans decide to besiege the fort. On October 4, 1914 at 6:00 am, the fortress was shelled by the heaviest German and Austrian artillery, which fired at it with 12 "and 12" projectiles. No less than 123 of these "fat Berthas" are fired. The very heavy destruction caused by the bombardment has made the fortress indefensible. On October 5, 1914 it falls into German hands. In 1934 the fort was redesigned as an infantry support point to form part of the fortified position in Antwerp. Machine gun bunkers are being built on the sites of the former gun turrets. Early in the morning on May 16, 1940, the fort was blown up and abandoned. That same day the Germans occupied the Fort.
Gemeente Nijlen
2560 Nijlen Kerkstraat 4
Website: Gemeente Nijlen

In Provincial Green Domain Kessel Heather you will discover the Kempen as it looked for a long time: a mix of heather, coniferous and deciduous forest, sandy plains and fens. You will find the typical heather vegetation. The sheep ensure the preservation of this authentic landscape.
Provinciaal Groendomein Kesselse Heide
2560 Nijlen Vaerestraat 4
Website: Provinciaal Groendomein Kesselse Heide

The Kleine Nete has its source on the border of the provinces of Antwerp and Limburg. Then it flows through the Kempen to Lier where it merges with the Grote Nete and forms the Beneden-Nete. The meandering, primeval river dominates the landscape of flowery grasslands and bushes, peaty swamps and mysterious brook forests. The liquid-taking system is an old agricultural technique, in which hay meadows along rivers are regularly irrigated with fertile river water. The irrigation resulted in a higher hay yield. However, this system fell into disuse. In the second half of the last century, the Kleine Netevallei was canalised and the connection between the river and the meadows was broken. This made it very difficult for many plants and animals to survive in the Kleine Nete Valley. Natuurpunt De Wielewaal has been trying since 1985 to restore the rich biodiversity of the past through purchase and management. Galloway and aubrac cattle graze in the Steenbeemden, which keep the landscape open.
Natuurpunt
2800 Mechelen Coxiestraat 11.
Website: Natuurpunt
Accessibility & HRC