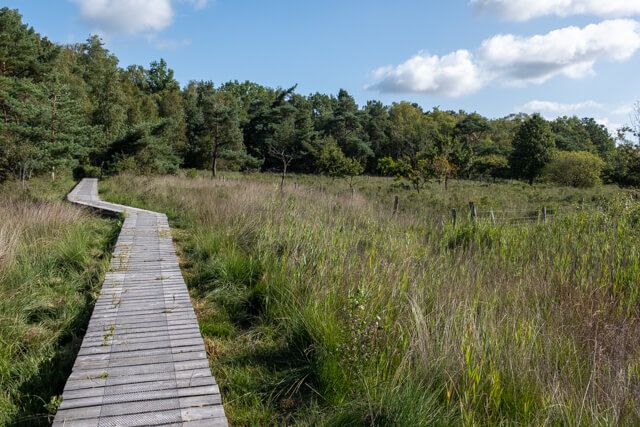 This walk goes through woods, beautiful heathlands with drifting dunes and via a wooden path over soaking peat bogs. Depending on the season, you can enjoy purple heather, spicy-smelling scrub bushes or sweet-scented broom on the way.

The walk starts at the visitor center and first goes through pine and deciduous forest, on the way it goes over a beautiful wooden path to a somewhat hidden fen. Afterwards you walk along large avenues lined with trees in the direction of a more pronounced heathland with drifting dunes. In short, a very varied walk for all seasons.

In the middle of the Kempen between Oud-Turnhout and Arendonk you will find Landscape The Liereman, one of the oldest protected nature reserves in Belgium. Here you can walk between bone-dry land dunes and soaked peat bogs. The Liereman is also recognized as a quiet area. In the past, farmers had their sheep grazed on the vast, rugged land. They put the top layer off the soil as fertilizer for the fields and won peat as fuel from the marshes. The result was an open and varied heathland that typified the Kempen for centuries. Landscape The Liereman is also a hit for heritage. 12,000 years ago hunters used the dune belt as a camp site and the many flint objects give the area an archaeological value. The heathland fell sharply in the mid-19th century. But thanks to the volunteers and the European nature program LIFE, large areas of heather, dune and flower-rich grassland were restored.
Natuurpunt
2800 Mechelen Coxiestraat 11.
Website: www.natuurpunt.be
Accessibility & HRC