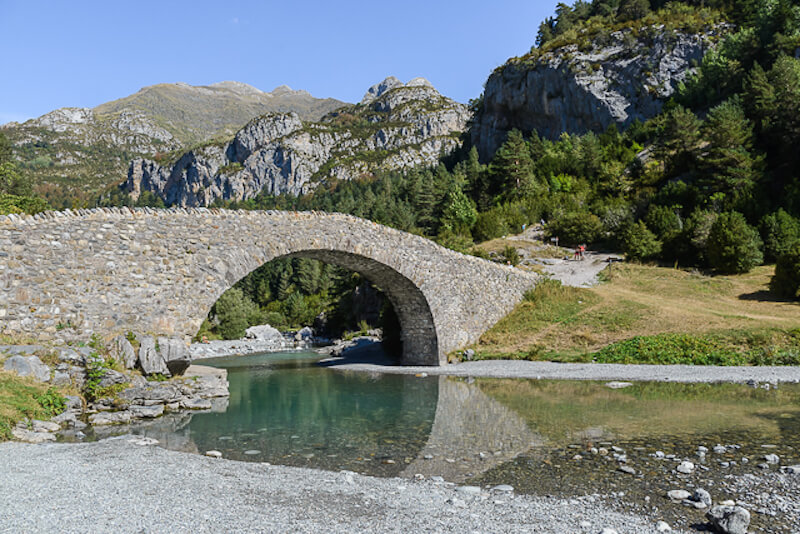 In the province of Huesca lie the Aragonese Pyrenees, the highest part of the Pyrenees with a number of mountains above 3,000 m such as the Aneto, Maladeta, Posets and Monte Perdido. The beautiful area of Ordesa and Monte Perdido has the status of National Park and is characterized by a large contrast between dry, bare rock areas and the constant presence of huge amounts of water in the form of waterfalls and fast-flowing rivers. To the east of Ordesa you will find the beautiful valley of Benasque. The Benasque valley runs between the two glaciers-covered mountain ranges Posets and Maladeta. But Huesca has more to offer, in the Somontano region you can walk endlessly in the natural park of Sierra y Cañones de Guara or what about the spectacular walk Congost de Mont-rebei or "la ruta del vértigo".

In the foothills of the Pyrenees you will find this nature park that is best known for its spectacular canyons and gorges. The mountain range lies in the Somontano region and runs from east to west between the Guatizalema and Alcanadre rivers. The highest point is Pico de Guara (2077 meters) and the park has an area of 81,350 ha. The park is in between the river Ebro and the Pyrenees, on the separation between the Mediterranean climate and that of the Atlantic Ocean. What characterizes the Sierra de Guara is the karst relief that is created by chemical weathering of the limestone on the surface due to the acidic properties of rainwater. As a result, caverns, canyons, rocks and bustling rivers have been formed and a large biological diversity can be found. In the lower parts lie the Mediterranean forests and higher up in the mountains, on the pasture, you will find forests that were formed under the influence of the Atlantic climate. The steep rocks in this area are the ideal place for many species of birds to nest, such as the vulture, the bearded vulture and the eagle. Among the mammals we find the wild boar, the fox, the mountain cat, the marmot and the stone marten.

The Posets-Maladeta National Park takes its name from the two highest mountain ranges of the Pyrenees: Posets west of the Benasque valley and Maladeto east of the valley. The nature park is 33 267 hectares and has approximately 80 peaks above 3,000 meters. The fauna and flora are therefore very specific. There are vast pine forests under the tree line. Chamois, stone martens and marmots are the most common mammals. There is also a wide variety of birds of prey present in the park such as the Red Wow, Golden Eagle, Griffon Vulture and Bearded Vulture. Take binoculars with you because these animals are often shy and cannot be easily approached. A geological phenomenon can be admired at the 'Forau de Aiguallut'. The water of the glaciers of the Aneto and Maladeta massif falls down from a waterfall and then disappears into a hole in the ground to plunge into the 'Riu Joeu' 4 km further.

The park was officially opened in 1018: it then only included the Ordesa Valley and was 2,086 hectares. In 1982 the park was expanded with the Añisclo valleys (Bellos river), Escuaín (gorge of the Yaga river) and Pineta with its boiler valley, giving it its current size of 15,608 ha. The park has been a UNESCO Biosphere Reserve since 1997. There are more than 1500 species of flowers, 171 birds, 32 different mammals and eight species of reptiles in Ordesa. A characteristic bird from the area is the bearded vulture, a vulture with a wingspan of three meters. These birds can almost only be seen in Europe in the Pyrenees.