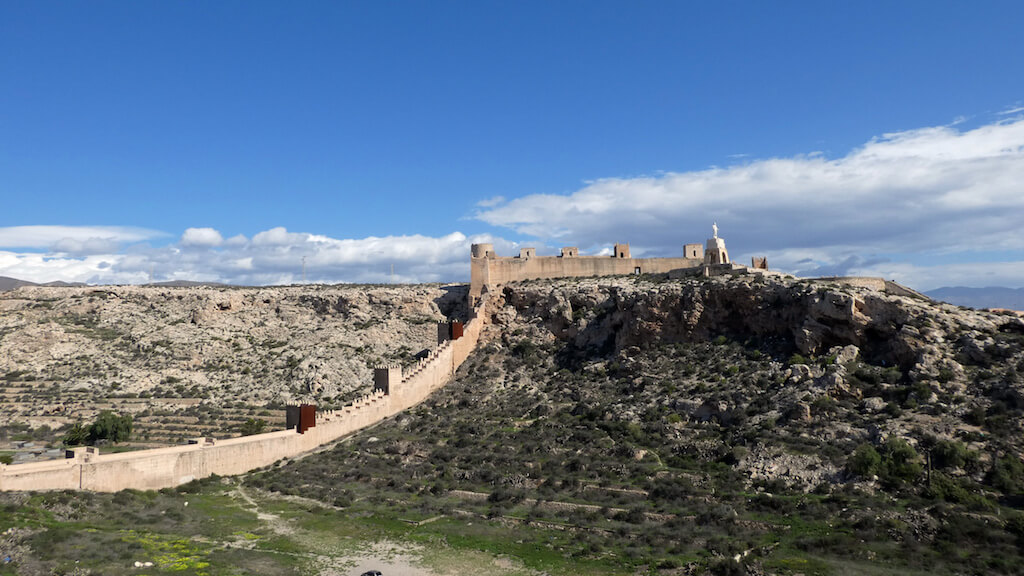 Almeria comes from the Arabic term "Al-Mariya" which means "Mirror of the Sea". When people talk about Almeria, most people think of sun, sea and beach, but nothing could be further from the truth. Natural areas, karst areas and even desert zones are the great unknowns in this region. In short, a region that is definitely worth exploring.

This biosphere reserve is one of the most beautiful coastal areas of the entire Mediterranean by the variety of landscapes, where you can walk along salt pans, dunes, beaches and fishing villages such as on the Isleta del Moro. The rugged mountain and rocky landscape of this area is isolated and geologically one of Europe's most special. The Sierra de Gata mountain range is the largest volcanic rock formation in Spain, with sharp peaks and ocher-colored steep rocks (shell sand formations). On the coast the rocks rise steeply out of the sea. They sometimes create 100 m high, angular and jagged cliffs, which are split by canyons and gullies leading to remote inlets with white sand beaches. Off the coast there are also many small, rocky islands and underwater large coral reefs with a rich underwater life.

The Tabernas Desert Natural Beauty Spot is located on a strip of 11,625 hectares situated to the north of the city of Almería, between the Filabres and Alhamilla mountain ranges. It is considered to be the only real desert on the whole European continent and its scenery is tremendously stimulating and startling. With a semiarid Mediterranean climate, rainfall that does not reach 250 mm per year and an average temperature over 17° C, Mediterranean type sand covered gullies have formed, known as "bad lands", with steppes covered in grasses. The GR 244 'Pueblos del interior' is 105 km long and is characterized by its ethnological and scenic contrasts: from the desert of Tabernas to the Sierra de Alhamilla. One of its most exploited economic resources is, curiously enough, the fact it has been used as a set for films.

This coastal wetland area is comprised mainly by two lakes, La Albufera Honda and La Albufera Nueva. Its location is surprising, in a semi-desert environment, surrounded by areas of intensive agriculture in contrast with the natural assets of this protected area. It is set between the mouth of the Adra River and the Dalías Plains, and is a permanent source of food and life for fauna living in the area. Its saline waters come from filtration of sea water, and especially from rainwater that flows in from the Estanquera and Adelfas Gorges. The presence of water all year round, combined with mild winters, make this wetland area the most important in the province of Almería and a passing place for birds on migratory routes between Europe and Africa

The Gypsum Karst formations in Sorbas are in eastern Andalucía, at the far east of the Tabernas-Sorbas sub-desert corridor, the most arid region in Europe. Hidden in this apparently barren, arid land lies one of the most stunning places in Andalucía. It is an underground world, carved out by the action of water over the ages on a large area of gypsum rock. There are more than 1,000 caves, most of which are interconnected, and a spectacular, varied array of crystalline formations: stalactites, stalagmites, columns and cave corrals. Their great educational and scientific value, along with their speleological interest, have made them into one of the world¿s most important gypsum karst areas in the world, a real geological treasure. The geological history of karst landscapes goes back six million years. At that time the Sorbas basin was filled with water from the Mediterranean. In a subsequent period, this sea became ever shallower, subject to high rates of evaporation, causing the precipitation of a section of gypsum more than 100 metres thick. When the sea withdrew definitively, the gypsum and other sediments remained on the surface, exposed to the slow but constant erosive action of rain water, producing this karst landscape of incredible beauty. Rainwater can slowly dissolve gypsum rock, giving rise to an abundance of closed depressions in the surface. This is where the karst "windows" appear, the sink-holes and caves that connect the arid surface with the complex network of galleries underground. Water penetrates through these windows and continues its erosive, smoothing action, defining Spain's largest subterranean cave system and the world's second largest (yet discovered) in gypsum: the Cueva del Agua system, which is almost 8.500 meters long.

Southwest of the coastal resort Roquetas del Mar is a 15km-long strip of protected coastline, the Punta Entinas-Sabinar Natural Area and Reserve. Like Albufera de Adra Natural Reserve along the coast, this is a wildlife haven encircled by a sea of plastic from the intensive agriculture that surrounds it. Even in the height of summer the beach is often deserted and its isolation makes it an ideal spot for birdwatching. The 1,960ha natural area is made up of sand dunes, beach and the raised beach of Los Alcores, immediately north of Punta Entinas. The dunes are interspersed with a series of freshwater and saline lakes. Some of the latter lakes are abandoned salt pans, the Cerrillos-Salinas Viejas. Declared a special protected zone for birds, more than 150 species have been recorded in this wetland part of the area, including waders, flamingos and the rare Audouin's gull.