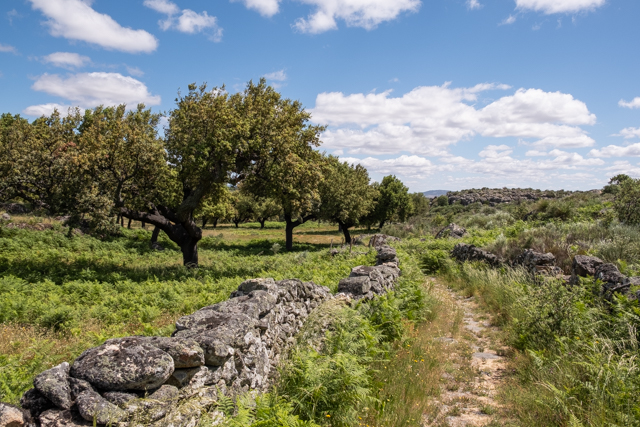 Portalegre is located on the edge of Serra de São Mamede, a mountainous area with a variety of flora and fauna, part of which has now been designated as a natural park. The city of Portalegre itself is of Roman origin. The north side of the Serra De São Mamede Natural Park is particularly interesting for walkers. Here deciduous forests are regularly interspersed with cultivated land. More to the south the slopes are planted with beautiful and also some rugged pine forests. Even further south, the mountains gradually merge into the rolling Alentejan plain with its montados, a beautiful park-like landscape with scattered cork or holm oaks.

he park in the east of Portugal, which is unique because of its natural beauty, lies in the transition zone between the Atlantic and Mediterranean climate. In the north it is also slightly cooler and wetter than in the south. The Atlantic influence in the northern part of the park can be clearly seen in the vegetation. We mainly see mountain oaks, the chestnuts and the present cork oaks. In the wild there are also a number of large mammals living in this protected park, such as the red deer, wild boar, foxes, otters and the genet cat. Hidden in the woods or thick undergrowth are also mongoose or pharaoh rats. These small predators, including tails, sometimes nearly a meter long, are found in Europe only on the Iberian Peninsula. The Serra de São Mamede Natural Park is also one of the few places in Portugal where the Iberian lynx still occurs. A number of lynxes have also been released on the Spanish side of the border. In the mountains Serra de São Mamede we find an unexpected Alentejo. High instead of flat! Green instead of dry! Here you can also find remains of the human civilizations that lived here in historical times. The highest point, which lies at 1025 meters, is the highest south of the Tagus and has an exceptionally beautiful view. To discover this area, walking routes have been laid out in the park, giving you the opportunity to view the varied vegetation and rare birds of prey such as the griffon vulture, the black kite or the hawk eagle, symbolizing the park. If you prefer the architectural heritage, you can visit medieval towns such as Castelo de Vide, Alegrete and Marvão, or the city of Portalegre, the most important in the region. In addition to the many country houses and monasteries that give the city an aristocratic atmosphere, it is the seat of the tapestry factory (Manufactura das Tapeçarias) where real artworks are made. To regain your strength, you can enjoy the regional specialties in which the "ensopado de borrego" (lamb meat) and the "cabrito assado" (goat meat) are indispensable. For dessert you can take a delicious "boleima" or a "sericaia" with prunes from Elvas.