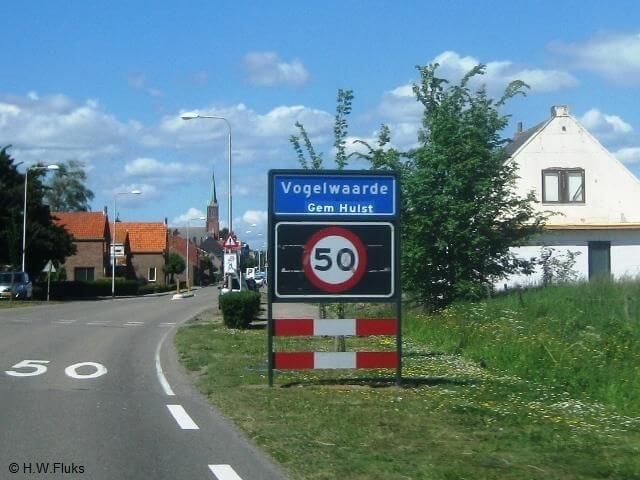 This nature walk introduces you to the vast polders west of Vogelwaarde. Along the way you walk on many unpaved roads along the remnants of the Hellegat. The hamlet of Poonhaven also has a link with the Hellegat.

Once you have left Vogelwaarde, you walk on the beautiful dikes of the Van Lyndenpolder, which was created by the damming of the Hellegat. From the Kleine Eendrachtpolder you walk further through the Hellegatpolder. In this polder there was still a small channel with the name Appelzak, the last remnant of the Hellegat. The hamlet of Poonhaven is named after a small agricultural harbor that functioned as a harbor for Zaamslag from 1821 to 1877. The harbor was located on the Hellegat, the inlet that originally connected Hulst with the Western Scheldt.

The Van Lyndenpolder is a polder belonging to the Polders between Hulst and Appelzak, northwest of Vogelwaarde in the Dutch province of Zeeland. This polder was created by damming the Hellegat, closer to the mouth. It concerned a seawall of 800 meters in length. The polder was completed in 1877. It was named after Rudolph Willem van Lynden, who was King's Commissioner in Zeeland. The polder is 174 ha in size.
No extra information.

This polder was constructed on the initiative of the Provincial Council of Zeeland. The last remnant of the Hellegat was therefore dammed up by a sea dike of about 1 km in length. Thus, in 1926, a polder of 132 ha was created. For several decades there was still a small channel called Appelzak in this polder, and this was the last remnant of the Hellegat.
No extra information.
Accessibility & HRC

Starting point:
4581 BD Vogelwaarde Bossestraat 173.
Parking:
Bossestraat near house number 132 is a parking space where you will not be a nuisance to anyone.
Public transport:
Bus stop Dorp | Bus line 10 at 700 meters from the starting point.
OV9292 | Internet: www.9292ov.nl