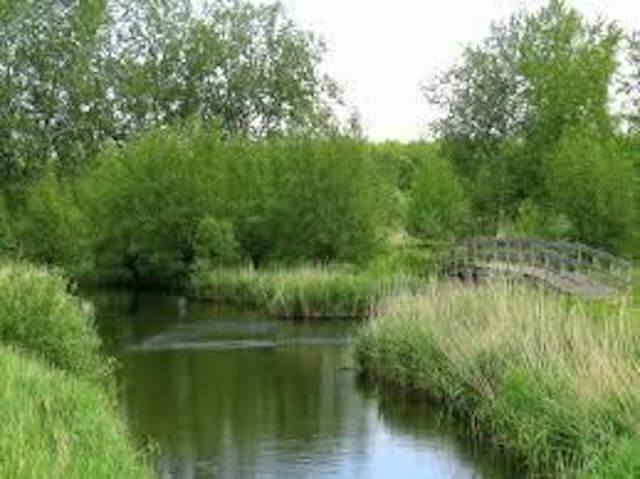 This walk takes you to the Groot Eiland, a beautiful piece of nature enclosed by creeks. Over the Liniedijk you walk through the hamlet Kijkuit further in the direction of the Zijkanaal naar Hulst where you pass the place where a Bailey bridge was built in 1944.

The Gdynia museum is also located on the Hulsterseweg, where you can learn everything about The Battle of the Scheldt. You continue in the direction of node 60, cross the bridge to walk next to the Zijkanaal naar Hulst. The Zijkanaal to Hulst is an old canal that is located between Axel and Hulst. It is approximately 6 km long and was part of a plan to connect the places Axel and Hulst with the Ghent-Terneuzen Canal, currently under construction. To this end, Zijkanaal C was first dug in the former bed of the Axelse Gat. This connected via the lock completed in 1827 to the Axelse Kreek.

At node 60 you will come across the place where the Gdynia Bridge or Gdyniabridge was located. This was a bailey bridge built by the Polish First Armored Division on September 19, 1944 across the Zijkanaal naar Hulst. The canal could be crossed via this bridge, after which another bloody battle ensued, which eventually culminated in the liberation of Axel. The bridge was located near the current hamlet of Kijkuit. Today, the bridge of the Third Shortening is located here, and a sign has been added as a reminder.

At node 60 you walk straight ahead and follow the Zijkanaal to Hulst further along the Kanaalweg. To your right is the Riet- and Wulfsdijkpolder. In the Middle Ages this area was known as the Zoot Wael and Zootpolder. It was a salty and swampy area. When this was inundated in 1586, the quality was even worse. The Hellegat was scoured in the polder. At WP1 you turn left in the direction of node 32. You cross the Zijkanaal Naar Hulst and follow the unpaved path until you reach the Hogeweg. Turn right here and follow the Hogeweg, you cross the Zijknaal Naar Hulst back and you arrive at the intersection with the Kanaalweg. Go straight on and continue on the Hogeweg until you reach node 18 and reach the starting point.

Please note, geese are walking around in the parking lot and they can greet you with a chatter.

The Groot Eiland still has a somewhat magical ring to it. Creeks encircle the central area that is privately owned. In the southeastern part there is a walking path to the so-called 8e Verkorting. A little more to the west, a bird observation hut has been erected on the grounds of Staatsbosbeheer. From there you have a beautiful view over the creeks, meadows and forests of the Groot Eiland.
No extra information.

In the Gdynia museum you will learn everything about The Battle of the Scheldt: the Battle for East Zeelandic Flanders. In September 1944, fierce battles were fought in the vicinity of the museum, which was ultimately settled in favor of the Allies. The decision came when the Poles managed to build a bridge at the Derde Verkorting, which they called the Gdynia (city in Poland) bridge, after which the name of the museum also refers.
No extra information.
Accessibility & HRC