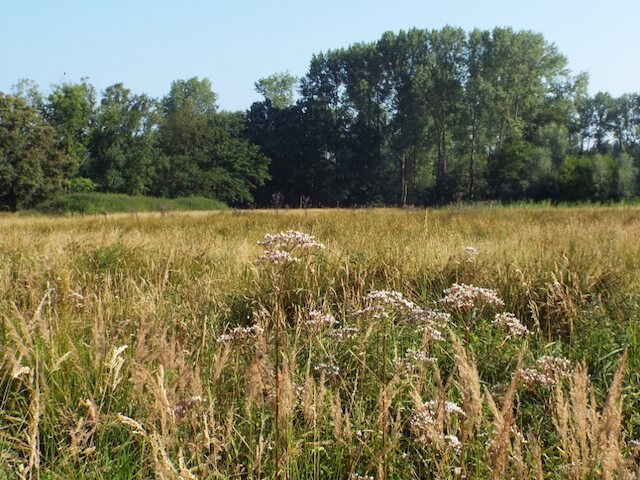 Red deer in the Scheeken.

Quite soon after leaving Best, the walking tour goes through the Scheeken-Mortelen nature reserve. In the spring of 2017, Brabants Landschap brought back red deer in the fenced part of the Scheeken-Mortelen and the Scheeken on the east side of the A2 motorway, both areas connected by a natural bridge. If the red deer cannot be seen in the Scheeken-Mortelen nature reserve, on the way back you get a second chance. The hike also goes through the fenced section on the east side. Heerenbeek is an old country estate that consists of three-quarters of damp deciduous forest. In Heerenbeek one passes a monumental farmhouse from the first half of the 19th century and a country house with hanging towers that make it look like a castle. The 't Veldersbosch is a damp, old deciduous forest with pieces of mixed forest. This forest was created around 1750 and is the oldest of its kind in the Meierij of 's-Hertogenbosch. It is a starry forest, in which there are nine avenues that meet at a central point "De Negen Dreven", on the edge of the Velder estate is an imposing country house called Groot Velder.

The monumental long-walled farmhouse on the estate dates from the first half of the 19th century and is built from brick under high tiled wolf roof. The windows of the living area have shutters and sliding windows. Furthermore, a small barn in the yard under a pitched roof. It is the successor of previous farms.
Erfgoedgeowiki
Website: www.erfgoedgeowiki.nl

On the Heerenbeek estate there are several monumental buildings, including a castle-like mansion (1864) with annexes (1905), a house with coach house (ca. 1864), a Flemish barn, now converted into a farm (17th and 19th centuries) and a bakehouse with stable (19th century).
Erfgoedgeowiki
Website: www.erfgoedgeowiki.nl

In 1878 the foundation stone was laid for the Eclectic-style country house, Groot Velder. Before that the garden was laid out in an English landscape style, based on a design by the famous landscape architect Maréchal in his time. This, among other things, he laid out the public gardens and city walls between 1880-1890 in 's-Hertogenbosch.
Landgoed Velder
Website: www.landgoedvelder.nl
Accessibility & HRC