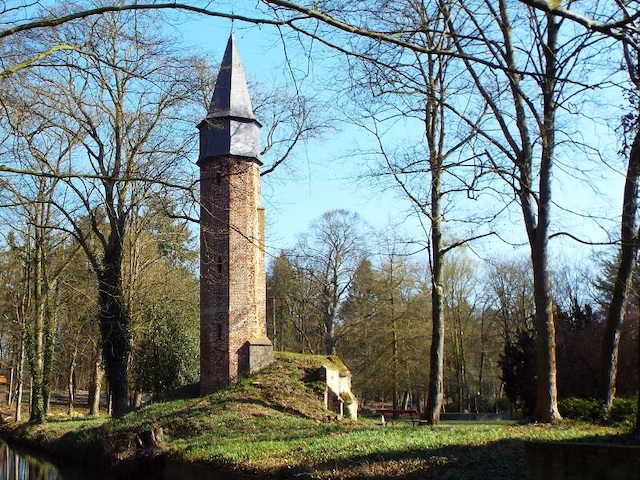 Walking tour through the Leudal nature reserve, a wooded area with stream valleys and a higher open area with heath. The Leubeek (upstream the Tungelroyse Beek) and the Zelsterbeek flow through the area, the hike follows both streams with nice height differences in various places such as the Litsberg with a steep sand wall with the meandering Leubeek at its foot. On the higher part of the area, the walk goes through the Busjop burial ground, a vast burial ground with 17 burial mounds, including a long bed.

Other points of interest include the Leudal Museum at the starting point and the remnant of the St Elisabeth mill. Furthermore, the Leu mill or Sint-Ursula mill, the special thing about this water mill is that it is the only one of the six still existing water-oil mills in the Netherlands that houses a corn mill and an oil mill under one roof. In the stream valley of the Leubeek you pass a narrow bailey bridge from the 2nd World War and on the De Bedelaar estate you pass the high stone Owl tower. Also at the end of the tour in the monastery garden of care center Land van Horne along a plague house and an old octagonal chapel tower.

96% of this walking tour is unpaved.

In 1278, the prior of the St. Elisabethsdal monastery received permission to demolish the watermill and rebuild it opposite the monastery along the Leubeek. The St. Elisabeth mill was a ban mill. This means that local residents, the Roggelnaren, were forced to grind their grain on this mill. In the 18th century, the St. Elisabeth's mill was expropriated by the French and sold through public sale. In 1844, St. Elisabeth's Mill burned down due to arson, but was quickly rebuilt. A few decades later an extension of the building followed and in 1908 agricultural barns were added and the mill was given the appearance of a farmhouse mill. Currently, the ruins with a hydro-electric turbine for generating electricity remain.
No extra information.

In the Leudal nature reserve near the Budsjop fen, there is an extensive burial ground that has been used primarily from the Late Bronze Age to the Early Iron Age. From around 1100-800 BC. they buried the ashes of the dead here after cremation. The ashes were placed in an urn or cloth and the whole was covered with a layer of pests. Every individual received his own burial monument. By each time laying a new hill near another, a vast burial field or urn field was created.
Grafveld Busjop.
Website: www.grafveldbusjop.nl

The De Bedelaar estate belonged to the paleontologist Eugène Dubois. Already in 1916 Dubois built a wooden bat tower based on an American model. This is now a national monument. In 1937 he also had a 15-meter-high stone tower built, the Owls Tower. This was heated via a heating channel to provide owls and bats with a pleasant temperature in winter. The tower was restored in 2011. The purpose of such towers was to control insects and rodents in a biological way.
No extra information.

In the monastery garden of the St. Elisabeth monastery, now the Land van Horne care center, is the octagonal chapel tower and a so-called plague house.
No extra information.
Accessibility & HRC