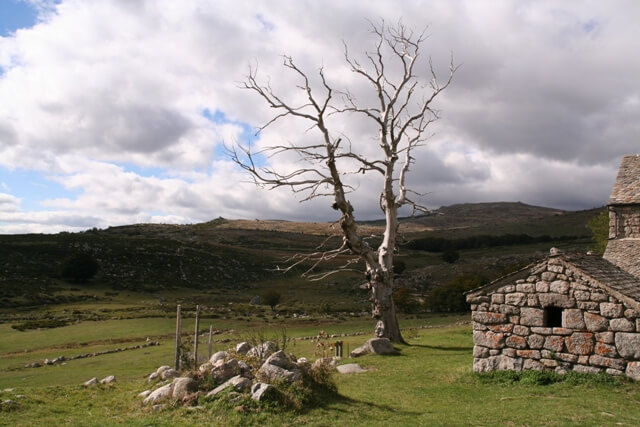 The department of Lozère is the least populated department of France. For those who love nature and hiking, this region, with its 3200 km of marked hiking trails, will certainly suit. A large part of the region lies in the Cévennes National Park with high-lying limestone plateaus, called Causses, which are divided by deep gorges such as the Gorges du Tarn and the Gorges De La Jonte. Mont Lozère (1699 meters) in the north and Mont Agoual (1567 meters) in the south are the highest points of the region.

The region of the Cevennes and Grand Causses is located in the southeast of the Massif Central. This low mountain range is bordered on the north by the Mont Lozère massif, with the highest summit being the Finiels (1,699 m) and in the south by Mont Aigoual (1565 m). These mountain ranges consist of granite. The Cévennes is a rugged region, consisting of slate, characterized by sharp, deep valleys. The Causses are high-lying limestone plateaus that are divided by deep gorges such as the Gorges du Tarn and the Gorges De La Jonte. The Cevennes National Park is one of the 7 National Parks in France and was established in 1970. It consists of a strictly regulated central zone and a zone in the periphery. The total area is 913 km2. 3,200 km of marked hiking trails have been laid out in these four areas

Villages in the Lozère.

La Garde Guerin is a medieval village in the area of Lake Villefort. This village is on the old route Le Régordane as Villefort is known for the nearby lake of Villefort.

The Ecomusée du Mont Lozère is located in the village of Pont de Montvert. What is also striking in the small village are the beautiful granite houses.

La Malène is a small hamlet located on the Gorges du Tarn and is known for 'Les bateliers de Malène'. The skippers of Malène take you on a journey of 8 kilometers in one of the most beautiful parts of the Gorges. The trip takes approximately 1 hour. The boats used to be used as a means of transport for goods and people because there were no roads in this part of the Gorges. Afterwards the skippers successfully focused on tourism. Malène is also a starting point for kayak or canoe trips on the Tarn.

Ste-Enimie is a beautiful medieval village in the middle of the Gorges du Tarn. A walk through the small streets with restored houses leads to the higher Notre-Dame and the Halle au Blé. A 19th-century interior has been reconstructed in the Le Vieux Logis museum. In the holiday months it can be very busy in this beautiful village.

The village of Florac is just about the heart of the Cevennes. Here the Ecomusée de la Cévenne is housed in the castle. Getting to Florac without seeing the source is the same as going to Paris without seeing the Eifel tower. La source du Pêcher has been around for three thousand years. The source Pêcher circuit lasts 1 hour with 9 stops. Information in the tourism office of Florac. You can also stroll around in the village and on Thursday morning there is a local market with many products from the region.

On the Causse Méjean in Le Villaret, an area of ​​312 hectares was fenced in 1993 to start a breeding program with Przewalski horses. This horse breed was thought to have died out until Colonel Przewalski rediscovered it in 1879 in Mongolia. The program was started with 11 horses and in 2003 the herd already had more than 50 animals. There are only a little more than 1,000 specimens of this breed in the world. Horses have already been brought from the Cévennes back to their natural habitat in Mongolia.

On the Causse Méjean you can still visit a unique cave. L 'Aven Armand was discovered in 1897 by Louis Armand. During the visit you will descend 100 meters underground and you will, among other things, become acquainted with the largest stalagmite in the world.

Furthermore, Florac Airport is located in the middle of the Causse Méjean. On the edge of the airport you have a beautiful view of the gliders that are being pulled into the air. Sunset on the Causse is pure enjoyment.

On the Causse Noir near the village of Meyrueis you can visit one of Europe's largest stalactite caves. "La grotte de Dragilan" is also called the pink cave. During the visit, you will receive a very interesting explanation from the guide on a 1-kilometer route. The cathedral is a stalagmite of 16 meters high. Considering that these stalagmites 'grow' about 1 to 3 centimeters per century. The cave was discovered in 1880 by a shepherd Jean Sahuquet when he saw a fox disappear into a crack.

Since 1887, an observatory of the French meteorological service has been established on Mont Aigoual (1567m). The 'rain mountain' owes its name to the abundant rains that plague its flanks. The warm southern air of the Rhone Valley meets here the climate of the Cevennes, resulting in the often harsh weather conditions on the mountain. A museum has been set up in the observatory where you can learn everything about the weather. In 1991 there was 10 meters of snow here. If it is not foggy you have beautiful views from all over the Mont Aigoual. In the winter one can sometimes see the Mont Blanc from the top. Furthermore, a Sentier Botanique has been set out that is definitely worth a walk.

In the Aigoual massif you can also visit L 'Abime de Bramabiau (The Palace of Happiness). L 'Abime is an underground river in the rock walls where the water roars down through various waterfalls. There are guided tours from April to mid-November.

In the Gorges de la Jonte, on the Belvédère les Terrasses in Le Truel, the vulture visitor center is set up. There is an exhibition and a very interesting presentation is given about these beautiful animals with images from three live cameras. The reintroduction program was started in 1986 after an earlier attempt had failed. Afterwards you can view the vultures on the observation platform through telescope viewers of the center. An absolute must. Meanwhile, the colony already consists of 600 griffon vultures and 80 monk vultures. Meanwhile, the bearded vulture was also introduced again.

Sleeping in the Lozère.