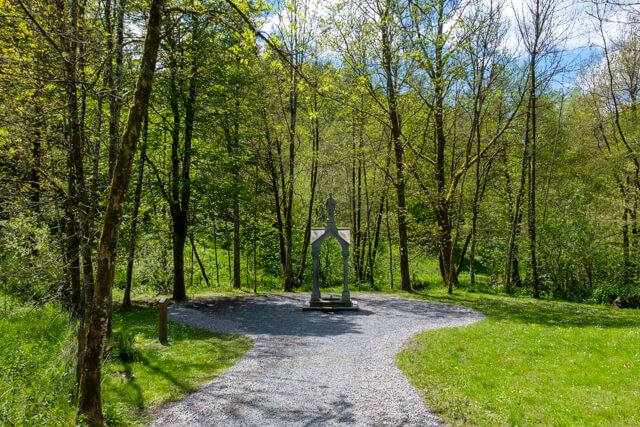 Almost immediately after the departure you go into a forest, you descend quite steeply to the bed of an old railway line that you follow for a while. On the Rue de Nafraiture you arrive at an old station that has been beautifully restored. You now follow the course of the Ruisseau d'Orchimont on a wide unpaved forest road. Still through forest, you then continue through the valley of the Ruisseau De Fayai, which you rarely get to see. After a long time, your road bends away from the stream and you arrive at Les Fayais. Here you are suddenly presented with an open landscape. You continue between meadows in the direction of the hamlet of Bellefontaine. You arrive at the edge of this quiet village at a beautiful picnic spot. You ascend to the center of the village and before the church you continue in the direction of the source Saint Furcy. Bellefontaine is known throughout the region for the quality of the water at the source Saint Furcy. The village is built around the well and the cross was planted by the patron saint Saint Furcy himself. Later, around the church, built by Godfrey of Bouillon, in honor of Saint Furcy, the village of Bellefontaine was created. Above the source of Saint Furcy is a beautiful granite monument carved into the rock. This is the cave of Our Lady. It offers a view of the beautiful valley of Ténépont. From the source you walk to the valley of the Ruisseau De Bellefontaine. This valley is a real gem. You cross the Ruisseau De Bellefontaine twice to finally reach Orchimont again.

Traditionally, these hot springs attracted people. It also turned out to be an eczema remedy when a woman noticed that her rash had cleared up after dipping her hands into the Saint Furcy well. It therefore became a place of pilgrimage in honor of the patron saint. This place was also revered by the farmers of the region to protect their herds. Pilgrims were given a copper plate depicting the well or the effigy of the saint. These could be hung at home or in the stables for protection. Today, Saint Furcy is venerated on January 16.
No extra information.
Accessibility & HRC