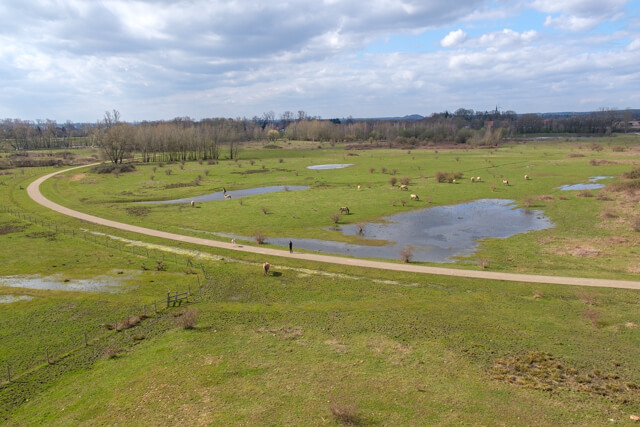 This versatile walk goes through a typical landscape on the Maas. You go through the nature reserves Kerkeweerd and Negenoord, the Maasuiterwaarden and the Oude Maas area.

You leave along an old Maas arm. The Maas has shifted its banks more and more to the east. You walk through an open landscape in the direction of the Kerkeweerd and Negenoord nature reserves. These former Maasuiterwaarden have been recreated by gravel extraction in a lake area surrounded by ecologically rich banks and a colorful and herbal mosaic landscape of grasslands and willow forests. It is a beautiful place for countless water birds, but the beaver also feels at home here. You can climb the viewing tower and enjoy the beautiful view. You walk through the Maasuiterwaarden near the hamlet of Boyen in the direction of De Schaapskuil. On the Vissersstraat in Dilsen you walk along an old Maas arm through the Oude Maas area. You walk back to the starting point past a vineyard, the hamlet of Boyen and an open landscape.

In the Negenoord-Kerkeweerd nature reserve, the Konik horses and Galloway cattle provide year-round management. They ensure that a mosaic structure is created with open spaces, flowery bushes and bushes. Recently, the beaver has also been helping. Because of that "eating work" and the supply of calcareous gravel and seeds from the south, you will find flowers and plants in Negenoord-Kerkeweerd that you hardly come across elsewhere in Limburg (except in the Maas valley).
Limburgs Landschap
3550 Zolder Dekenstraat 39
Website: Limburgs Landschap

During the mobilization, nine Belgian soldiers belonging to the regiment "Eerste Jagers te Paard" were billeted in the Colson family in Rotem. Their task was to defend the bunker on the Maas and to slow down the advance of the German invader. One of the nine soldiers was killed in the raid on May 10, 1940. Fatally hit by a machine gun burst. The young victim, Lucien Vandenbroeck, came from Sint-Gillis Brussels and was 20 years old. Jef Colson, deeply moved by the event, has erected a simple monument on the site.
Geen extra informatie.
Accessibility & HRC