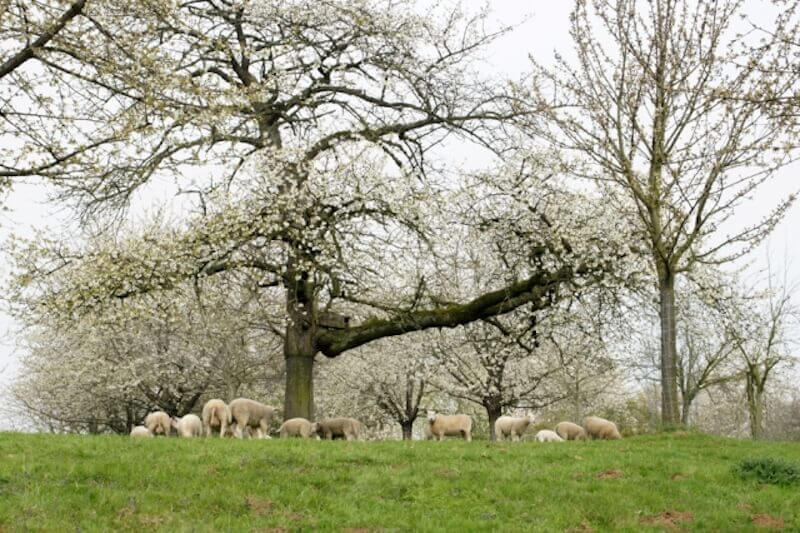 A varied walk through sloping Haspengouw. On this walk you get a mixture of vistas, hollow roads, orchards, meadows, fields and numerous chapels.

Some paths can be soggy

The chapel's name refers to Anna, the holy mother of Mary. The chapel stands on a high slope and was already referred to as 'Chapelle de Vier Linden' on the Ferraris map (1771-1777). She is currently still surrounded by four lime trees.
No extra information.

Lime-rich springs on the slope provide a lot of biodiversity and together form the beginning of the Demer. This earned the Wijngaard forest the nickname 'source forest'. The Wijngaard forest is a complex of forests, meadows and orchards. On the very steep parts we find a slope forest in which mainly oak and hornbeam thrive. The sources of the Demer originate in this area. The steep valley walls are the work of the numerous streams that made their way through the landscape. The presence of lime brings with it a lot of specific flora, including the very rare autumn crocus. This poisonous plant makes leaves in the spring and blooms in the fall. Several badger families have dug their castle in this forest. You can see their sliding marks on the walls of the hollow roads. In the Middle Ages, the southern slope was dotted with vines belonging to the Canons of Tongeren. Hence the name Vineyard Forest. In the early nineteenth century, the grapes gave way to hay meadows with hedges and wood edges. The steepest parts became forest.
No extra information.

Hermits lived in Vrijhern for more than 250 years. They actively committed to the community and maintained the vault and chapel. The current buildings were built in 1709. When you walk along the field road past the orchards, you come across a mysterious building: the Vrijhern Hermitage. It consists of a house where a hermit lived until 1904, a former school that now serves as a café and a chapel that is an exact copy of the world-famous chapel from the Italian pilgrimage town of Loreto. The first hermit, Geurt van Elst, moved to Vrijhern in 1667. For more than 250 years, he and his 25 successors would perform tasks such as teaching and caring for the sick. So hermits certainly did not live - as is often thought - in complete seclusion. They were socially engaged people who are committed to society.
No extra information.
Accessibility & HRC