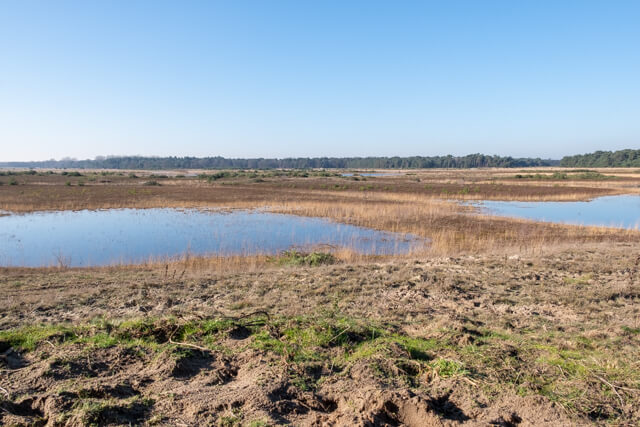 From the visitor center you walk along the banks of the meandering Dommel and soon arrive at a viewing hut with a view of the Gemeentevijver and the Hageven. A little further you have a viewing platform and an observation tower that both give a nice view of the Dommel and the Gemeentevijver. You go a little further along the Dommel and then walk through a more open landscape along beautiful roads. You go past the area with Galloway cattle and you finally reach the heath. In the heathland you will once again come to a viewing platform from where you have a fantastic panorama of the heathland and the various fens. From the platform you walk a little over a wooden path and narrow forest paths through a beautiful pine forest. Once you leave the forest you reach the unique area of the Pelterheggen. These flow meadows were laid out from 1847. They were irrigated with lime-rich water from the Kempen Canal and used as a hay land. The hay was transported by ship through a channel of 3 km length, with the high bridge over it, to allow the highly loaded ships to pass, and a lock to overcome the 3-meter decline. You continue around the grazing area to reach the visitor center again.

The Hageven-De Plateaux spreads out over Belgium and the Netherlands. It is an oasis of 600 hectares with heathland, fens, forests and grasslands, where the Dommel winds its way through the beautiful landscape. The Plateaux is situated between dry sandy soils and the stream valley of the Dommel and is partly a wooded heathland. Near the Belgian border lie flowing fields: meadows that have been irrigated with (lime-rich) Meuse water for a long time by means of a long system of channels and canals. The Hageven is a mosaic of different types of nature. The flanks and tops of the dunes are the driest grounds in the area. The sand no longer sprays like in the old days. Bunt grass and rough hair moss have largely fixed the sand. Peat is a remnant of a ring peat, an extremely rare type of peat, where peat development lies on the surface of the water like a thick carpet. Sand extraction just before the fen has created a second puddle, which is connected to the original fen. Both waters have been used as fishponds for years, but since the acquisition in 2004, management has focused on restoring the bog development. The surrounding haylands are transformed into heath-rich grasslands, where dragonflies and butterflies quickly feel at home.
Natuurpunt
2800 Mechelen coxiestraat 11.
Website: www.natuurpunt.be
Accessibility & HRC