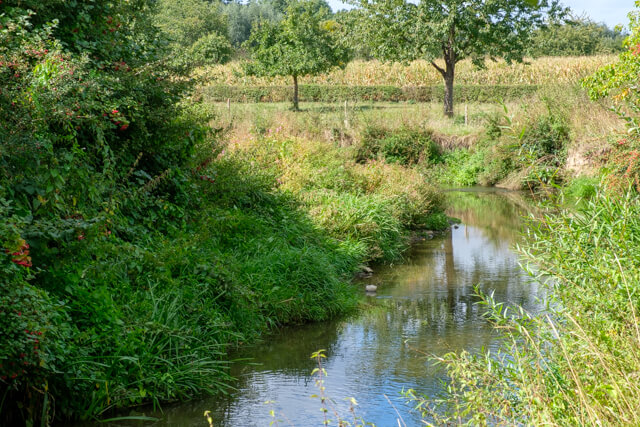 From Moelingen in the Maasdal you walk past fields and orchards to the Dutch church village of Mesch. This village was on September 12, 1944 the first Dutch village that was liberated by American soldiers. From Mesch you walk along vast fields interspersed with numerous orchards in the direction of the Berwijn nature reserve. Oaks, hornbeam trees and a lot of spring flowers grow on the chalky slopes of this area.

The valley of the Berwijn.

Very good marking by nodes of the Voeren hiking network.

Mesch is the southernmost church village in the Netherlands. On 12 September 1944, Mesch was the first Dutch village to be liberated by American soldiers. Next to the public primary school is a memorial stone in memory of the liberation. The Meschermolen was one of the six water mills that made use of the water of the river Voer on Dutch soil. The mill is part of a large Limburg farmhouse. The current farmhouse is a successor to a Carolingian villa. This villa was built out of half-timbering, but was replaced by brickwork in 1699. The Meschermolen has milled potash and grain for several consecutive centuries. The Meschermolen was completely restored between 1996 and 1998.
No extra information.

POI 2 - Nature reserve of the Berwijn.

The Valley of the Berwijn houses very fragile and unique fauna and flora. The area is therefore protected as a habitat directive area. The special inhabitants of the valley cross your path everywhere. Oaks, hornbeams and a lot of spring flowers grow on the limestone slopes. The most famous inhabitant of the Voeren region, the timid badger, is also leaving its mark: the underground badger fortresses show that he is enjoying himself here.
Natuur & Bos
3500 Hasselt Koningin Astridlaan 50.
Website: www.natuurenbos.be
Accessibility & HRC